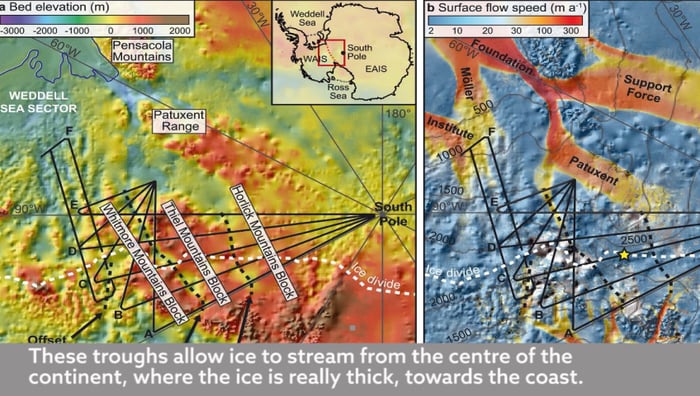 Recently, researchers involved in an ambitious project found valleys and troughs deep inside the thick icy region of Western Antarctica near the South Pole. Scientists believe that the recent discovery can help contribute to the knowledge of rising global sea levels. A team of British researchers from Northumbria University and other participating universities and institutions used ice-penetrating radar to map the subglacial landscape near the South Pole which is one of the most under-discovered regions of the Antarctic continent. Radar was chosen as an alternative to the gravity field mapping data that satellites could have provided since there was a gap in the data released by the satellites.

Researchers assert that this recent discovery could help them understand the past, present, and future behavior of the continent. When the radar was used to map gravity field of this particular region in Western Antarctica, researchers came across three depressions or subglacial troughs that link two major parts of the content i.e. the Western Antarctic Ice Sheet and the Eastern Antarctic Ice Sheet. When the scientists scrutinized the valleys further, they found out that the valleys prevent ice from East Antarctica from flowing to the West and to the coast.

However, researchers also deduced that in the light of ice sheets thinning due to warming temperatures, the valleys could speed up the ice flow from the center of the Antarctica continent towards the edges that will further contribute to the rising sea levels. Kate Winter, a research fellow at the Northumbria University and the lead author said it in the research paper which is published in the journal Geophysical Research Letters.

A project called PolarGAP Project under the European Space Agency was incorporated to understand the gap in the extensive data available from satellites. Researchers mapped these deep troughs and mountain ranges in order to understand the puzzle. Moving further, out of the three newly discovered valleys, Foundation Trough is the largest with the length of 217 miles and width of more than 20 miles. Patuxent Trough – another valley found between the two Antarctica ice sheets is nearly 200 miles long and about nine miles in width. The third valley found is the Offset Rift Basin which is around 18 miles wide and 93 miles long.

When the project was initiated, researchers expected to find a mountainous region, however, the valleys came as a surprise. According to the last satellite survey, it shed light on the fact that 10% of the glaciers were reported to move towards the center as the ice beneath the surface begins to melt. Some glaciers in western Antarctica are retreating at the rate of 25 meters per years or so while some of the largest glaciers in East Antarctica are retreating at a fast rate too.