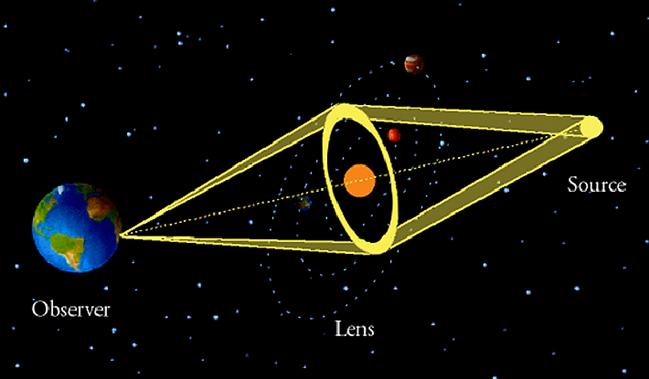 Albert Einstein’s theory of relativity has yet proven its credibility in the latest study by a group of scientists which is published in the journal Science. Researchers used the data gathered by NASA’s Hubble Space Telescope and used the data collected by the European Southern Observatory’s Very Large Telescope and were able to find out the gravity imposed by a galaxy millions of light-years away from the Earth behave in the same manner as the famous physicist predicted in his theory.

According to Bob Nichol of the University of Portsmouth, England, it is satisfying how Einstein’s theory of relativity is often challenged with the best telescopes available on the Earth and finally find out how right Einstein was. One of the properties of gravity, as predicted by Einstein, is that the objects with considerable mass exert a strong gravitational field that can bend the light of distant objects. AStronomer Arthur Eddington proved this phenomenon back in 1919 during an eclipse in the Milky Way galaxy where they were able to detect the bent light incident from a star that appeared near the sun.

This phenomenon is known as ‘gravitational lensing’ and it is often used to study and detect far and distant galaxies and other celestial bodies. This phenomenon is practiced by massive galaxies with the enormous mass that bends the light of galaxies behind them. This particular phenomenon is called ‘strong gravitational lensing’. Nichol studied one of the nearest galaxies called ESO 325-G004 which is located around 500 million light-years away from Earth in order to test the credibility of Einstein’s theory.

Researchers were able to calculate the velocity of the stars at which they were moving within the galaxy which allowed them to calculate the mass of the galaxy needed to keep the stars in orbit rather than flinging outward into space which is a phenomenon observed if the velocity is more than the critical velocity. Further, the compared the data with the lensing data observed by the Hubble Space Telescope. The findings had an error margin of 9% which might seem has a big difference but considering the experiment, it is the most precise measurement ever made.

US Online Pet Food and Supplies Market Size, Analysis, Opportunities and Future Prospects 2026
A day on Earth will last longer than 24 hours in about millions of years from today