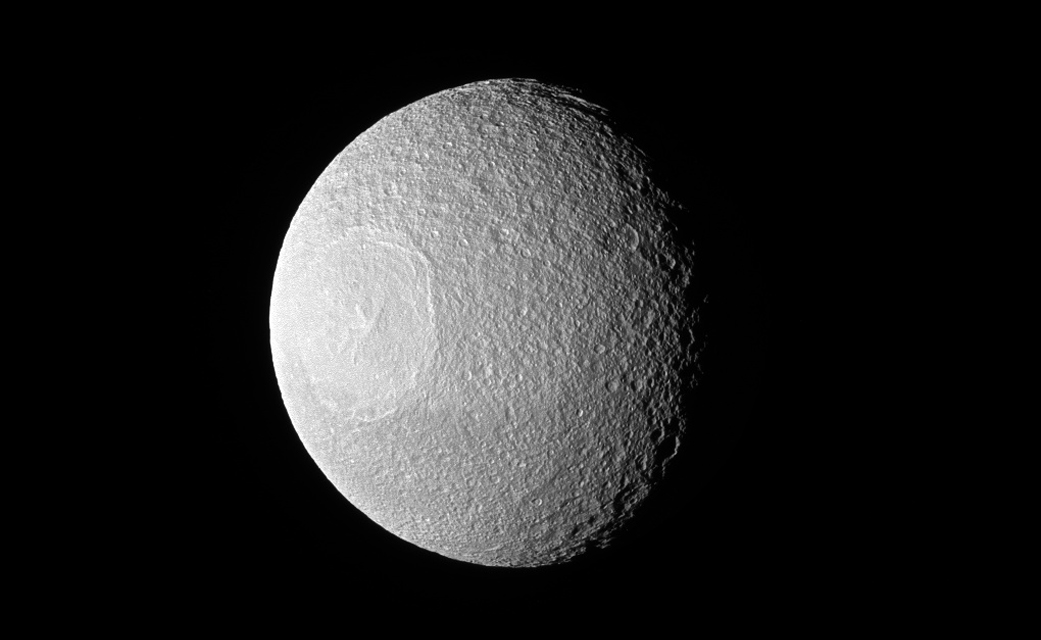 NASA – the US-based space agency recently shared the jaw-dropping image of “Tethys” – the larger arctic moon of Saturn and quickly, the picture went viral on social media. While some group of people and even the scientists have suggested the Tethys have many similarities a “space eyeball, staring into space”; now another group of viewers has emerged, who are suggesting the views of the icy moon have the resemblance to a death star.

It is quite normal that the entire social media users never agree on the same view and the scene of Saturn’s icy moon Tethys is no different. You must often catch people arguing on topics like ‘if the dress is blue or black, the purse is white of golden’, but the topics and arguments on Saturn’s chilly moon Tethys is quite interesting.

After the first view of the moon, a number of space analysts, including NASA claimed it to be an eyeball, staring into space. But soon after the picture went viral on the internet, people on social media platforms started arguing about the resemblance of it with the death star.

Currently, it is the most enchanting question of social media – “Does Tethys looks like a massive eyeball hovering in external space, as NASA suggests, or does it look like a Death Star from Star Wars?

According to NASA, the similarity of the icy moon of Saturn with a giant space eyeball is emerging because of its one of huge craters called Odysseus, and it’s several of innermost peaks. Because of the larger impacts of Odysseus on Saturn, some inbound crashes have been materializing, triggering unexpected peaks to the core of the crater. And this is responsible for the resemblances of the moon with the massive eyeball. However, refusing the statement of NASA, many social media users claim the Tethys to be a prototype of Death Star.

The spectacular image of Saturn’s icy moon was recently published by NASA, for public access. The image was beamed back by the Cassini spacecraft, owned and operated by NASA. As per the statement was given by NASA, the jaw-dropping view of Tethys was framed in November 2016, throughout a close flyby of Cassini spacecraft with the Saturn. When the picture was taken, the moon of Saturn was located at an approximate distance of 367,000 kilometers (228,000 miles) from Cassini spaceship