NASA’s New Horizons probe which completed the iconic Pluto flyby back in July 2015 is back online now. After visiting Pluto, the nuclear-powered New Horizons probe was shut down to conserve energy for further observations in December 2017. After a brief period of 6 months, the probe woke up on June 5, 2018, for its next unprecedented mission where it will soon study a Kuiper Belt Object (KBO) called Ultima Thule.

According to the scheduled prepared by NASA, the probe will practice a flyby near Ultima Thule on December 31, 2018 – New Year’s Eve, that will make it the farthest object ever visited by humanity since the farthest spacecraft from the Earth are Voyager 1 and Voyager 2. New Horizons has launched almost nine years ago when Pluto was still considered as a planet, however, it was soon downgraded to the status of a dwarf planet after scientists came to know that it’s a small icy object from KBO.

The probe whizzed past the Pluto in July 2015 which is about 3 billion miles away from the Earth. The photos and data collected by the spacecraft proved instrumental in understanding the most distant planet of our solar system after it was downgraded as a dwarf planet. Soon, it discovered an object in the KBO which intrigued researchers and thus, they decided to study it further by directing the probe towards the object.

Ultima Thule is located about 4 billion miles away from the Earth. The object is extremely dark since the light from the sun barely illuminates it. The object was found after being illuminated by starlight that the probe caught and was earlier named as 2014 MU69. Later in 2015, NASA ran a campaign to name the object where ‘Ultima Thule’ which stands for ‘beyond the farthest frontiers’ according to Norse mythology. The dimensions of the object are still unclear as it is suggested that it’s about the size of 20 miles long and 12 miles wide. 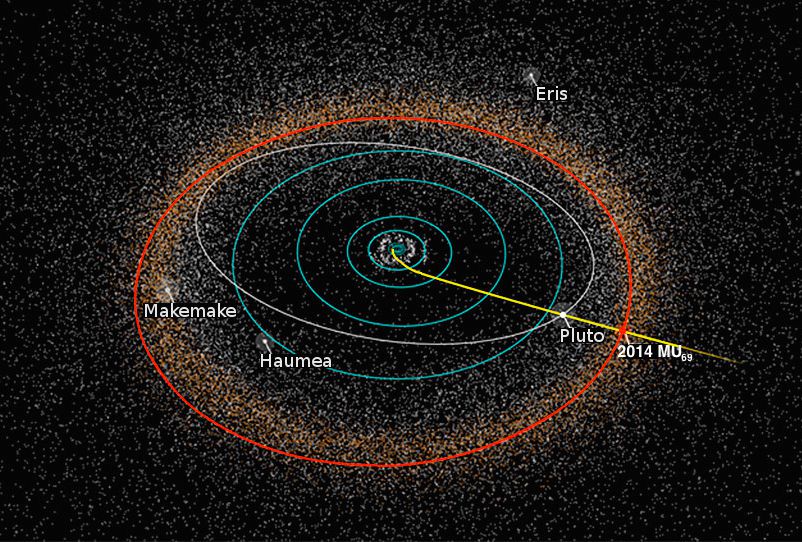 New Horizons that was launched more than nine years ago will maintain the record for the farthest object visited by humanity for years since no other spacecraft is currently in the pipeline to launch for such deep space missions. The probe is transiting across the cosmos at a staggering speed of 35,000 mph at which, it whizzed past through Kuiper Belt and then,  Pluto. KBO is an intriguing region as it contains leftovers in the form of asteroids and other objects after being leftover from the formation of the solar system. Since these objects are icy and frozen due to the extreme cold and lack of sunlight, the material present on it could prove instrumental in providing further evidence about how life came to be and how the solar system was born and more.

Researchers could have directed the probe to enter Pluto’s orbit to understand it further, however, it would have consumed the precious fuel it is carrying and thus, it performed a flyby only. Ultima Thule, the next object in the probe’s list is a mysterious object as it is considered to be in the shape of an extreme prolate spheroid. Its body could have a single or two chunks of objects in a binary formation that resembles a peanut-shaped object. The probe will make its flyby on the New Year’s Eve on December 31, 2018.

NASA’s Mars Opportunity rover hits another giant dust storm; It may not be able to communicate for a while
Here are few Russian space traditions that every cosmonaut must follow