Home » News » Space » NASA’s Mars Opportunity rover hits another giant dust storm; It may not be able to communicate for a while 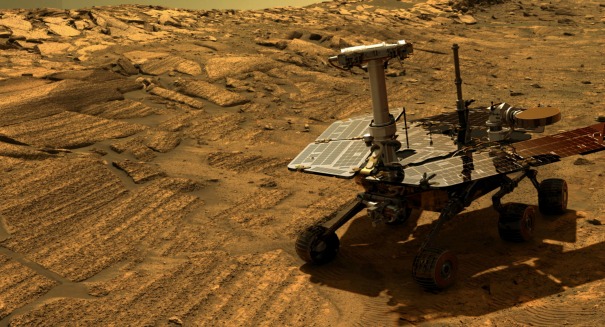 Originally designed for a 90-day mission on the red planet, NASA’s Opportunity rover has completed more than 14 years on Mars after it landed on the surface in January 2004 along with its twin rover Spirit that ceased to function back in 2010 after developing complications. Talking about the Opportunity, it is only of the hardest space bot which tackled the 2007 dust storm with ease, however, it has entered into a new and colossal dust storm recently that could hamper with its communication to the Earth for a while.

Opportunity landed on Mars in January 2004 for a 90-days mission to explore the surface of Mars, however, it continued to work superbly completing over 14 years as of now. It escaped the 2007 dust storm with ease. Last week, however, it entered another intense storm on June 3rd that formed right above the rover and has been strengthening ever since. The rover sent pictures of the storm approaching depicting that the sky is getting darker and darker by every day. Presently, Opportunity is generating the lowest amount of power ever collected on Mars due to the darker sky which has turned daytime into night.

But what does that means to the rover? NASA’s Opportunity rover generates power from sunlight using solar panels which are used for power generation. The power is stored in internal batteries that powers all the components, equipment, and instruments of the rover including the ability to communicate or say, send and receive data from Earth. If the rover goes into battery reserve mode where it might not be able to communicate until the storm subsides, the engineers will not know if the internal temperature has lowered below critical levels. Also, the rover will lose its ability to move due to the low power voltage. Although Opportunity can combat increasing cold with its heaters, however, these instruments need power and that is the catch.

For now, NASA has turned off many instruments onboard Opportunity and thus, it won’t conduct any scientific experiments until the storm subsides. Now, the basic task of the rover is to collect as much light available and recharge its batteries so that it can communicate with the Earth on a specific time. On June 10, engineers will able to communicate with the rover and feed the required commands, however, engineers suggest that things might change soon since this intense storm could last for a month or more.

Engineers pointed towards ‘low power fault mode’ wherein if the rover goes into this state of power, it will work under simple autopilot with no equipment working. The rover will remain off for the rest of the day except a specific window wherein it will carry out communications with the Earth but it won’t take pictures. The bad news is that engineers believe that Opportunity has already skipped this mode due to critically low battery storage which has put it into rolling brownout stated wherein it might not communicate with the mission control. Even if it communicates with NASA, it would take a longer duration of time for the rover to collect sufficient power needed for the transmission.

NASA has asked the Deep Space Network which is a constellation of communication antennas spread across the globe to allow additional time for the rover to transmit data. For now, the biggest threat to Opportunity is the increasing cold which could result in danger citing the Spirit rover which stopped working in 2010 after it developed complications due to low temperatures.

But not everything is a bad news for the rover which is presently at the equator where the summer will begin soon. Researchers added that the dust storm on Mars act as a blanket to absorb heat and provided required warmth to the planet thus keeping the planet warm and habitable for the rover. This particular storm is considered as intense than 2007 storm and expected to last for a month or more.

Scientists at India’s ISRO made an EPIC discovery
New Horizons probe will soon whiz past Ultima Thule, the farthest object visited by the humanity