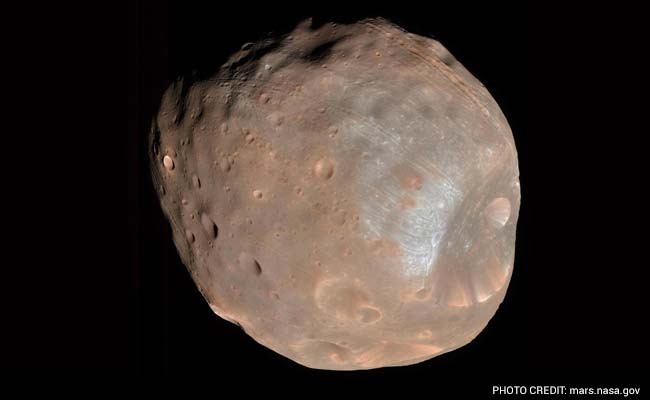 NASA’s spacecraft, Mars orbiting- MAVEN, in a recent rare event was planned to perform an avoid in turn in the head-on collision with Moon’s probe. This unique event is named as crater-filled Moon Phobos.

The Mars Atmosphere and the Volatile Evolution, together known as MAVEN spacecraft of NASA has been continuously orbiting Mars.It is just over two years since MAVEN is studying the red planet’s upper atmosphere, ionosphere and interactions with the sun and solar wind. NASA’s spacecraft MAVEN has indeed found out some incredible results too.

NASA’s spacecraft MAVEN and the Phobos would have arrived at an intersection point in their space orbits within seven seconds of each other on March 6th, 2017. This was supposed to cause a massive head-on collision between the two NASA’s spacecraft. Phobos is the larger of the two Martian moons. MAVEN would have most likely crashed into Phobos if the space agency left it on its own. But thankfully, the mission’s scientists of NASA’s spacecraft MAVEN have kept a constant eye on all the celestial bodies in and around MAVEN that cross the rocket’s path, and they have beforehand found out about the collision phenomenon. They were successfully able to predict the scenario in advance and hence were able to perform the spacecraft’s first collision avoidance maneuver. It prevented the disaster from happening.

NASA reported, “During its first collision avoidance maneuver, NASA’s spacecraft MAVEN carried out a rocket motor burn that massively boosted the spacecraft’s velocity by 0.4 meters per second which are less than 1 mile per hour that steer clear of Mars’ moon Phobos. The correction was small, but it was enough for the spacecraft to avoid the crater-filled moon by about 2.5 minutes.”

NASA’s spacecraft MAVEN moves in the elliptical orbit around Mars. It has an orbit that crisscrosses the orbit of those of other NASA’s spacecraft. It crosses the moon Phobos many times over the course of a year. The phenomenon when the orbits cross each other, the objects get the possibility of colliding. But if they collide, they arrive at that intersection point at the same time. And that is the reason why NASA planned to perform an event to avoid the head-on collision of NASA’s spacecraft MAVEN with Moon’s Phobos.

These scenarios were tested by the scientists and came to know well in advance about this crash. Hence they carefully monitored by NASA’s Jet Propulsion Laboratory (JPL) in Pasadena, California. It sounded the alert regarding the possibility of a collision. Hence the event of avoiding the head on collision definitely proved successful for NASA.