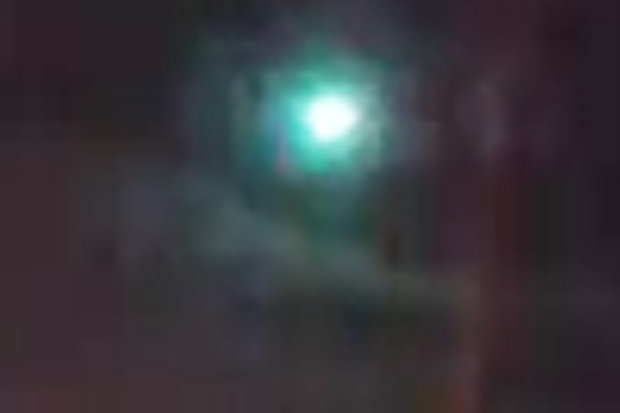 In an astonishing event, residents, as well as commuters, have witnessed a mystifying object in the night sky on the eve of New Year. People of Leeds, Sheffield, Doncaster and many other places saw circular greenish-looking UFO-like hovering in the sky. The mysterious object flashing bright green light created many doubts in the mind of people. Some thought that the alien might have landed on Earth on the New Years day.

Many excited people took to Twitter to share their experience and opinion about the mysterious bright green object that lit up the night sky. A tweeter user having username Virtual Astro twitted, Reports coming in of a bright green object/ meteor seen over the UK. It was huge by all accounts! #omgweareallgoingtodie”. Some people got scared after watching the green flashing object suddenly on the New Years Eve.

A user named Dale‏ @DaleofEurope said in a tweet, It was incredibly fast. I’m in Leeds but sightings also in Bristol and Aberdeen!” Another user named Sue Hymond seemed to be very excited after spotting unique phenomenon in the night sky. He wrote, Absolutely amazing color, knew it wasn’t a firework, too big. “What an experience, sight for sore eyes on New Year’s Eve.” Lin Mathers tweeted, “Bright blue/green light sped across the sky, over the castle towards Denaby Crags.” So low in the sky, genuinely thought it was coming to land. Stunning sight! breathtaking.”

Another user Austin Pickering added, “Spectacular doesn’t even come close to describing it”. Amidst all these excitements and shock, there was one thing that haunted most of the people. That was the presence of another alien world in the Universe. Many people thought the bright greenish object to be UFO carrying aliens or operated by intelligent life. If it comes out to be true, then it will strengthen the fact that we are not alone in this world.

Maybe the worst video ever but a meteor just flew across the sky it was quite cool pic.twitter.com/Mqkv5QM7EC

The UFO hunters must now be looking at the mystifying event more carefully and must be investigating the case thoroughly to know whether that unknown circular greenish object was a UFO or something. But as per the latest reports, the International Meteor organization has confirmed that the greenish object flashing in the night sky was just a bright meteor that got split into two parts.

Last week an object reported being a meteor streaked across the sky by lighting up the sky as wells as the social media. The event was recorded by a webcam at the Mount Agamentics Conservation Right in york, in which the meteor headed to the north.

An astronomer said that it was similar to a meteor and was around the size of a golf ball passing at the speed of 10 and 30 miles per second. This event was discussed on Twitter around 6 pm when the audience saw that flaming object above. This strange meteor left everyone wondered and described as ‘Ball Of Light’ with a greenish glow. A few people explained it as the very bright blue flash of light.