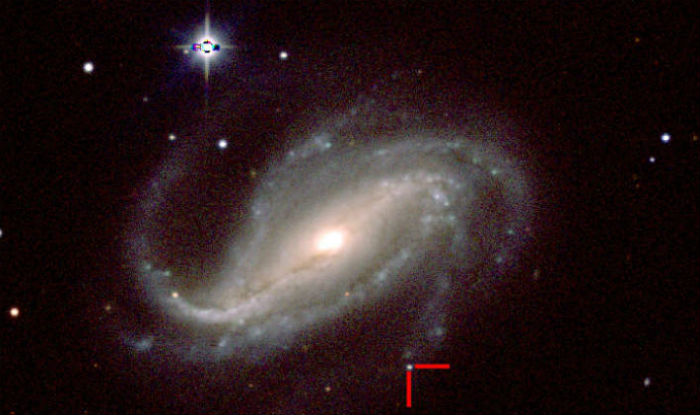 An amateur astronomer has got hold of the first burst of the exploding supernova. Getting the initial bright light of the newly born supernova is considered to be very rare and the chances of such discovery are 1 in every 10 million supernovae. But, this lucky amateur astronomer from Argentina successfully managed to see the first light of a massive exploding star or supernova. A supernova marks the end of a star’s life.

Just before its death, the massive star explodes and this explosion emits extremely bright light that could be seen from Earth also. Scientists previously hypothesized that during the end stages of a star’s life, the explosion begins from the star’s core this is where the first burst of the explosion occurs. But till now no one could see the first light of an exploding star because of the randomness of the explosion and the extreme quickness of the light coming from the shock occurring at the star’s core. But what professional scientists could not do with their powerful telescopes, an amateur astronomer did that with his camera.

For the first time ever, the amateur astronomer captured the initial burst from the explosion of a massive star with the help of his camera. The name of the amateur astronomer is Victor Buso and the supernova that he captured is SN 2016gkg. The exploding star belongs to the spiral galaxy NGC 613 which is situated almost 40 million light years away from our Earth in the constellation Sculptor. Buso, the coauthor of the latest study, spotted the first burst of SN 2016gkg in September 2016 while aiming at the spiral galaxy NGC 613 with a new camera fitted to his 16-inch telescope. He saw an unusual bright spot at the end of one of the galaxy’s spiral arms while going through the later images.

Gaston Folatelli, an astronomer at the Instituto de Astrofisica de La Plata appreciated the work of Buso and said, “Victor was really very lucky — cannot deny that — but also he had enough expertise to be able to see the object and to realize that this was possible.” University of California Berkley astronomer Alex Filippenko said that the Professional astronomers have long been searching for such an event. “Observations of stars in the first moments they begin exploding provide information that cannot be directly obtained in any other way,” said Fillipenko. That latest discovery can five some vital information about the physical structure or inner core of the star just before its demise and also can throw some light about the nature of that explosion.

How aliens would look like and when will we meet them, reveals Physicist Michio Kaku
Huge near-Earth asteroid made a close encounter with Earth on February 25