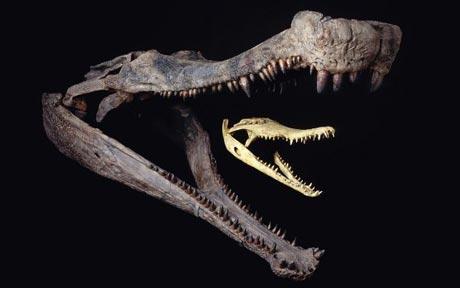 Palaeontologists were surprised to find 245 million years old crocodile fossils in Tanzania. Crocodiles were always known to be Dinosaur’s cousins ever since palaeontologists first found out similarities between dinosaurs and crocodiles.

However, according to the recent studies, palaeontologists were surprised to see that they least resemble each other. Palaeontologists on this Wednesday depicted fossils of a since quite a while ago necked, four-legged, meat-eating reptile called Teleocrater Rhadinus that came to up to 10 feet (3 meters) in length and lurked a Tanzanian floodplain about 245 million years prior.

These creatures existed during the Triassic period which came millions of years ago which means that these creatures existed on Earth even before Dinosaurs first came into existence. Hence scientists have now started calling these crocodiles as close cousins of dinosaurs than calling them directly as ancestors of dinosaurs. The appearance of these crocodiles varied from what palaeontologists had anticipated from the soonest delegates of the dinosaur transformative genealogy. Teleocrater had an unforeseen blend of crocodile-like and dinosaur-like attributes.

On a serious interview with palaeontologist Ken Angielczyk of the Field Museum in Chicago, who is one of the researchers in the study published in the journal Nature about Crocodiles quotes that, “I’m surprised by the mosaic of features that it possesses. In terms of how it shakes up our understanding of dinosaur evolution, Teleocrater shows that the earliest members of the dinosaur lineage were very unlike dinosaurs and that many ‘typical’ features of dinosaurs accumulated in a step-wise fashion instead of all evolving at close to the same time.”

According to the researchers so far done on dinosaurs it was found that 250 million years ago, first archosaurs came into existence which was broadly classified into two spices: One was known as crocodilians and the other one was known as dinosaurs which extinct the flying reptiles called pterosaurs, and avian birds, that evolved from feathered dinosaurs. According to the studies, Teleocrater is the oldest-known member of the dinosaur-pterosaur-bird archosaur branch.

Palaeontologists also predicted that these dinosaur-like species must be smaller in size and two legged predators which were called as Herrerasaurus, which lived around 231 million years prior in Argentina. While dinosaur predators were bipedal, Teleocrater rather was four-legged, looking externally like a cutting edge Komodo mythical serpent.

The fun part is Teleocrater fossils were found in the same region where two-legged meat-eater Nyasasaurus were found. The later species were known to lived perhaps a couple of million years later than that of the former. These remains were extracted from different parts of Tanzania.