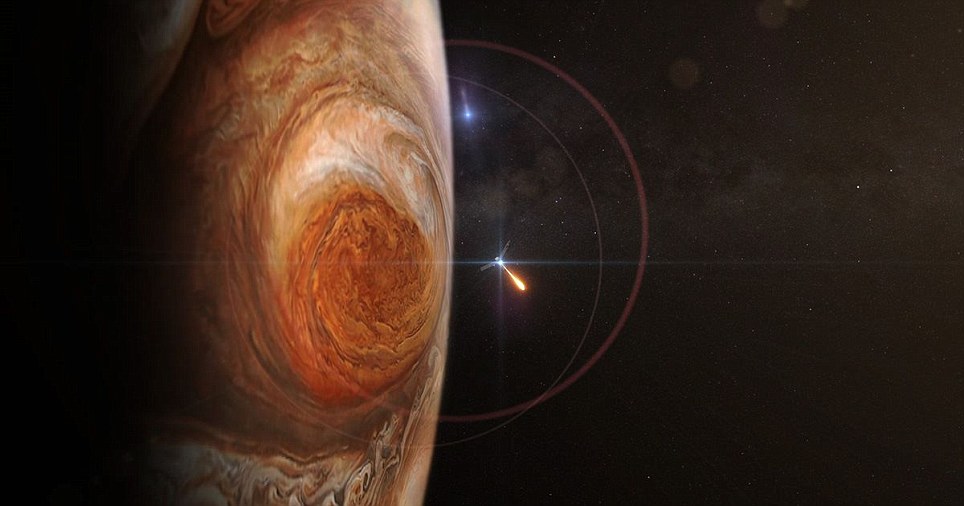 National Aeronautics and Space Administration (NASA) Juno spacecraft has shot amazing images of the Jupiter during the tenth science orbit of the gas giant, revealed scientists at the US space agency. The remarkable feat was achieved during Juno probe’s 11th close flyby of Jupiter where the spacecraft made the closest approach at 6:36 a.m. PST (9:36 a.m. PST) Earth-received time.

As per the data released by NASA, the iconic spacecraft was nearly 2,100 miles (3,500 kilometers) above the planet’s cloud tops during the closest approach. This flyby was a gravity science orientation pass. During orbits that highlight gravity experiments, Juno is in an Earth-pointed orientation that allows both the X-band and Ka-Band transmitter to downlink data in real-time to one of the antennas of NASA’s Deep Space Network in Goldstone, California. All of Juno’s science instruments and the spacecraft’s JunoCam were in operation during the flyby, collecting data that is now being returned to Earth.

Meanwhile, the spacecraft shot some beautiful images of the largest planet of our solar system and beamed back to Earth. Scientists at NASA processed the image and released it for the space enthusiasts and skygazers around the globe.

Previously, Juno had shot an incredible image of the scary atmosphere of Jupiter. The stunning photo looks no less than an art by Picasso. Jupiter completely fills the image, with only a hint of the terminator (where daylight fades to night) in the upper right corner, and no visible limb (the curved edge of the planet).

JunoCam imager is a color camera installed aboard Juno Spacecraft which also serves as one of the eyes of the probe. The imager was installed on the spacecraft for the public engagement, and it is of no use for scientists and for research purposes.

You can see all the images captured by Juno spacecraft here.