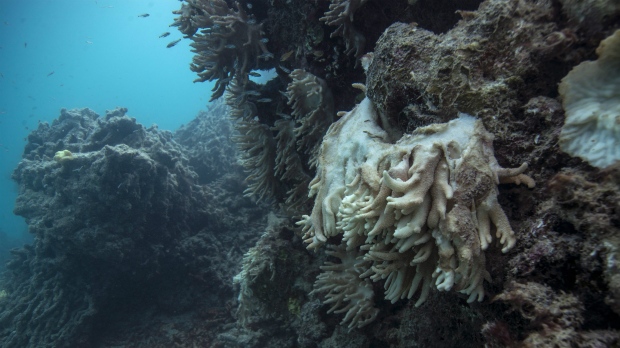 Scientists are of the opinion that Australia’s Great Barrier Reef is continuously bleaching off its coral reef for two years consecutively. The bleaching initiated last year, but the phenomenon is still proceeding and shows no sign of stopping.

Coral bleaching can be termed as a phenomenon caused due to pollution. When algae which are present inside the water is expelled due to excess stress caused by the temperature change and chemical changes that occur in the water, the coral starts losing its actual state and turns somewhat whitish. This phenomenon is termed as coral bleaching. It is the sign that corals are about to die. Freat Barrier Reef started bleaching off its coral last year and still is bleaching its reefs off.

In an interview with Marine Park Authority director of reef recovery Dr David Wachenfeld, he said to the media, “Coral reefs are a beloved natural wonder but less appreciated is that they also directly support the jobs, livelihoods and food supplies of many millions of people. What will happen to these people as vast areas of coral die? So, we called for a significant lift in action to bring down carbon emissions and scaled efforts to reduce local pressures on reefs, so they have the best chance of withstanding climate change.

Another important witness, Brett Monroe Garner, a conservation photographer and marine biologist who started documenting the bleaching with Greenpeace last year, said: “I’ve been photographing this area of the reef for several years now and what we’re seeing is unprecedented. Just a few months ago, these corals were full of colour and life. Now, everywhere you look is white. The corals aren’t getting the chance to bounce back from last year’s bleaching event. If this is the new normal, we’re in trouble.”

Scientists are of the opinion that Great Barrier Reef is losing its coral life because of excess exposure to stress and temperature changes. The stress tolerance of these corals are decreasing every day and soon they might collapse if this phenomenon is not brought under control. Last year was recorded as the highest coral bleaching year of the world.

After analysing the scenario, John Tanzer, from WWF International, said: “What is unfolding before our very eyes are the starkest evidence that climate change is already wreaking havoc on the ocean.

What changes and steps must be taken to stop coral bleaching is still not discussed yet, but scientists are still researching and trying to figure out ways to stop this bleaching.