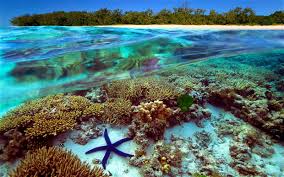 One of the world’s natural wonders, Australia’s Great Barrier Reef has the largest living structure. It’s on the verge of decline.

Isn’t it shocking? Yes. Sadly, But this was very much expected.

Researchers from the Australian Research Council just completed comprehensive surveys and have found that minimum of about 800 individual coral reefs across 8,000km are undergoing severe mass bleaching. Two-thirds of the length of the reef has been suffering from bleaching which is a condition heading towards mass coral die-offs.

Bleaching does not necessarily cause the death of corals at the moment, but it leaves them crippled and unable to get enough nutrients to survive. There exist algae within the corals, which are called zooxanthellae, they provide the corals with some of the nutrients and help them remove waste. Without which, the corals are more prone to disease. If the algae are unable to repopulate the corals, the corals will also be more vulnerable to starvation.

The newly affected area of the reef covers 1,500km which consists of only the reef’s southern third which has been left unaffected by rising water temperatures for so long. It has been found that the significance of bleaching this year is that there’s been zero time for recovery and it has taken place back to back. We can clearly see that it will extend to 500km south of what it was last year’s bleaching.

This year’s bleaching has been affecting reefs even further south. And the worst is yet to come as the surface water temperatures across the topics continues to rise due to global warming.

Mass bleaching takes place when warming temperatures place stress over the algae which are symbiotic, it provides food for corals that they have as inhabitants and provides them with their flamboyant colours. As algae die off, corals turn into bone-white colour and increasingly harmful to further environmental stress.

It is going take at least a decade or so for the affected corals on the Great Barrier Reef to heal up fully from the current mass bleaching episode. And that’s only going to happen if there are no more such bleaching episodes over the coming decade. We can also say that much of one of the world’s underwater treasures is going to get perished within a matter of years.

“This is the fourth time the Great Barrier Reef has bleached severely — in 1998, 2002, 2016 and now in 2017,” James Kerry, a marine biologist with the ARC Center of Excellence for Coral Reef Studies, “Bleached corals are not necessarily dead corals, but in the severe central region we anticipate high levels of coral loss.” “Mass bleaching events 12 months apart offer zero prospects of recovery for reefs that were damaged in 2016,” Kerry said.

Let this be a wake-up call for the world we’re making through our constant burning of fossil fuels.

Climate change and its effects on air travel
Octopuses are genetically smart: know how