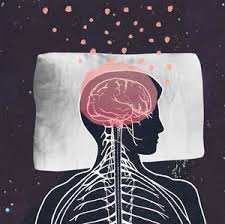 “Hot Zone” of the brain is the dream centre

Although we do not remember, but almost all of us have about five dreams each night.

But a team of researchers has found a pattern of brain activity that might reveal not only when the brain is generating a dream but also some of the content of the dream.

“When subjects were having [dream] experiences during sleep, there was a region in the back of the brain that tended to be very active, as if this region was a little bit more awake,” says Francesca Siclari, a researcher at the Centre for Research and Investigation in Sleep at Lausanne University Hospital in Switzerland.

Patterns of brain activity in the brain also tell us about whether the dream included a face or movement, according to Siclari and a team of researchers report in Nature Neuroscience.

The team discovered that dreams usually come up during both rapid eye movement — REM — and non-REM sleep. But then there were long periods of deep sleep in which dreaming did not occur at all.

The team then studied dreams while monitoring electrical activities of the brains of 32 people when they slept.

Participants were being awakened from time to time and asked to report if they’d been dreaming or not. This was done to reduced the problem of people forgetting dreams during the full night’s sleep.

And even the people in the study were able to recall not only whether they were dreaming or not but also most of the time what they had been dreaming about. Dreams were mainly about riding a bicycle, geometric shapes in motion, smelling perfume, etc.

In the process after a person reported a dream, the investigators used to go back and review brain activity patterns which were recorded with a technique known as high-density electroencephalography. This provided the researchers to connect dreaming with a decrease in low-frequency activity and an increase in high-frequency activity at the back of the brain.

By seeing these activities of the brain, the researchers were able to at least assume when a person dreamt about 90 percent of the time.

According to a smaller study, the researchers viewed at the activity in areas of the brain that responding to specific stimuli, like while  seeing a face, hearing something or some movement. An activity that took place in this area offer clues about what the person had been dreaming about while being asleep.

For example, when someone’s dream included a face, there was an activity in a part of the brain which is used to recognize the faces. When a dream involves some sort of movement or even senses a movement, there was activity in an area that is involved in the recognition of the movement.

“What they’re really measuring is what’s happening before you wake someone up and the person remembers having been dreaming,” Stickgold says. And there is a possibility that forgotten dreams might have a different electrical signature in the brain.

Our dreams recruit the same regions of the brain as it experiences while we are awake for specific some contents This also an indication that dreams are the experiences which actually occur while wakefulness, and that they are not any sort of ‘inventions’ which we make up when we wake up.

While sleeping, the brains keep crossing the boundary between unconsciousness and dreaming, which according to the researchers is a form of consciousness.