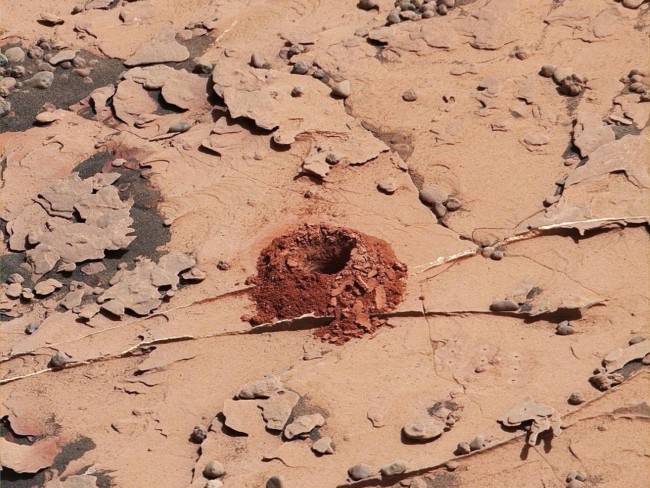 In the last quarter of 2016, the drill installed at the end of the robotic arm of the Curiosity rover was sidelined because its motor controlling the sideposts stopped working. Soon, engineers at the mission control started troubleshooting the issue and devising workarounds to get the drill up and running which took more than a year to actually execute it on the red planet. On May 20, Curiosity rover extended its robotic arm and bore a 2 inches deep hole into a rock called Duluth with its new drilling technique.

Engineers at the Jet Propulsion Laboratory (JPL) have been testing the new technique for a year now. After the technique qualified several tests when performed on the testbed, the technique was used on the red planet which sits at an average distance of 66 million miles from the Earth. The new drilling technique involves boring hole with the drill while the arm forces it deep into the rock which is similar to how humans would drill a hole by applying a certain degree of force to it.

At first, the rover tried the new technique by boring a 0.5 inches hole into a different Mars rock, however, this wasn’t enough for the rover to grab samples for testing. This is when Curiosity bore another 2-inch-deep hole into a rock called Duluth which resides at Mount Sharp on the Gale Crater. The rover is designed to collect powered samples by drilling holes into the rocks and then, transport it to one of the two high-tech mini laboratories installed on it for further analysis. However, the instrument that collects the sample from the drilling bit and delivers it into the laboratories has gone haywire too. According to the mission team, it will devise plans and conduct several tests on it in order to feed the samples into the laboratories. The suggested method is to sprinkle the samples directly into the laboratories, however, it will have to qualify on the testbed before engineers could execute it on the Curiosity rover.

The team managed to pull off the new drilling technique after intensive testing at the testbed located at the Jet Propulsion Laboratory in Pasadena, California. The team will analyze the data sent by rover after utilizing the new drilling technique. The data will help improve the technique by tweaking the variables to get the required results. Curiosity is currently on the Mount Sharp which is a 5.5 km tall mountain at the Gale Crater which is the landing site of the rover. This is the same place where Curiosity discovered traces of an ancient lake at the Gale Crater a few months ago.

China’s Queqiao relay satellite brakes near the Moon; It will enter the halo orbit soon
The latest SpaceX launch was different in many ways: Fairings, first stage boosters & Block 4 rocket