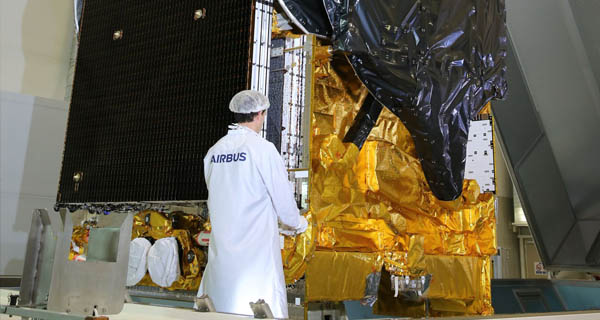 SpaceX will launch its Falcon 9 rocket on an SES-12 mission carrying the largest satellite in the world on Friday, June 01. Luxembourg-based SES became the first customer of SpaceX about fourteen months ago to carry out the launch of a satellite aboard an already used rocket by SpaceX. According to Martin Halliwell – chief technology officer at SES, SpaceX’s Falcon 9 has already proven its worthiness by then. He added that although launching satellites on reused rockets was a great prospect, it was a new concept and wasn’t tried ever, however, with the success of SpaceX missions to launch used rockets, it has now become a norm for the company.

Last year, Luxembourg-based SES joined hands with Elon Musk’s SpaceX to launch its satellite on a reusable rocket i.e. Falcon 9 which went extremely successful. Coming Friday, SpaceX will conduct its 13th mission with a reusable rocket carrying SES-12 mission which will be the fourth time for SES. The launch window commences at 12:29 a.m. on Friday, June 01 and continues till 02:57 a.m. EDT Friday. The rocket will be launched from Cape Canaveral Air Force Station’s LC40, however, there is only 40% probability of a good weather during the launch as per the inputs from Air Force’s 45th Weather Squadron.

The Falcon 9 booster that will be used in the SES-12 mission on Friday was last used in September 2017 when SpaceX launched Air Force’s X-37B space plane from the Kennedy Space Center. The booster performed a safe and controlled landing after which, SpaceX conducted hundreds of tests and checks to verify its viability to take another launch to space. SpaceX will not attempt to recover the booster this time as it was originally planned to handle only 2 to 3 launches. Also, SpaceX is trying to phase out all the older generation of rockets to make way for the new Falcon 9 Block V rockets which have been designed to take up to 10 or more launches.

Luxembourg-based SES is a major satellite operator that will undertake the operations for the satellite built by Airbus Defense and Space. The satellite weighs around 12,000 pounds which makes it the heaviest and one of the tallest satellites in the world. It is a combination of two satellites that will carry out the functions of direct-to-home broadcasting and broadband for its customers over the Middle East and Asia-Pacific regions. SES-12 is touted as the biggest satellite to work on electric propulsion rather than usual chemical fuel which is used for the transition of the satellite to its final orbit. The satellite’s electric propulsion will take months to finally settle in its final orbit rather than weeks when performed using chemical fuel.

For people who love watching rocket launches, this will be a fascinated sight as it is a night time launch. It will be visible across large distances such as when Atlas 5 launched in 2015 during night time, it was visible more than 200 miles away. For watchers, viewing the launch will be limited to causeways and public parks only since most of the restaurants will be closed during the launch. The best place to view the launch during night time is the causeway along State Road 528 and Max Brewer Bridge at the end of State Road 406 in Titusville.

Today, three astronauts will return from the ISS
China will launch its own space station starting as soon as 2020; China has invited UN members nations for contribution