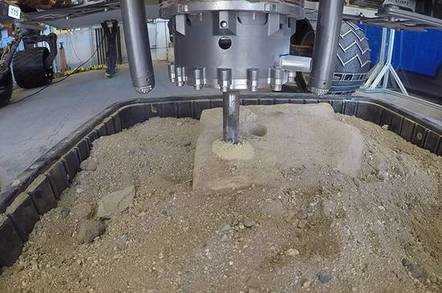 NASA’s Mars Rover Curiosity will start drilling on the red planet again if a remote fix developed by the researchers successfully rectifies the issue. According to the reports, Curiosity rover’s drill attached to its 7-foot-long robotic arm suffered a hiccup in 2016 when it was decommissioned until the mission team responsible for the operations of the rover could find a way out while sitting millions of miles away from it. But a new technique that will be tried soon on the actual rover will bring the drill back online allowing researchers to conduct perform further analysis with the Martian soils.

The remote fix is being tested at the Jet Propulsion Laboratory (JPL) of NASA in Pasadena. The technique called Feed Extended Drilling (FED) is being tested at the facility. Although it might sound too technical in actual but the answer is, we all are familiar with the technique. FED mimics the way a person would drill a hole in any surface on Earth i.e. by applying a certain degree of force on the drill that makes the process easier and efficient. Curiosity rover will use the same technique where its arms will be used to exert a pressure on the drill bit when it is drilling on the surface of the red planet.

When tried earlier, the technique failed to perform as expected and thus, the engineers came up with a plan to introduce a percussive element which will produce a hammering force on the drill bit and enable it to bore a hole without any complication. Note that hammering technique has been a part of the Curiosity rover allowing it to bore a 2.5 inches deep hole into the rocks according to its original drilling technique. The engineers tested the technique on testbed at the JPL lab in Pasadena which went successfully.

Engineers will soon perform the same function on the actual Curiosity rover on Saturday night on May 19. The resulting data obtained from drilling will enable the researchers to fine-tune the process and improve it in coming months. The researchers will look forward to tweaking various parameters such as increasing or decreasing the exerted force and other factors so that the hole is perfectly cut according to the specification. Once the hole is bored, the crucial task for the rover and the engineers will be to safely and securely transport the soil samples into the internal laboratory of the rover without spilling it.

Presently, Curiosity rover is climbing Mount Sharp which is a 3.5-mile high mountain since September 2014. When passing through a vivid landform called Vera Rubin Ridge, the researchers stalled and decided to direct the rover downhill. Ashwin Vasavada, the Curiosity project scientist, stated that the purpose behind directing the rover backward is to study the ridge which is considered as a high value in drilling since analyzing its rock will enable the researchers to understand the martian soil better.

Orbital ATK’s Antares rocket rescheduled for launch on Monday at 4:39 a.m. EDT
TESS captures the first ever test image of more than 200,000 stars in the southern sky