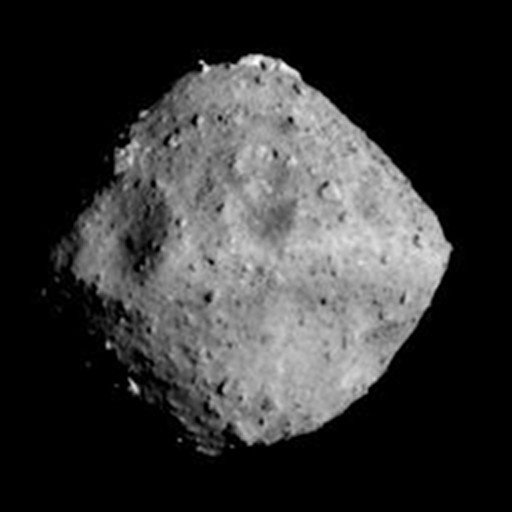 Japan Space Agency (JAXA) Hayabusa 2 spacecraft is closer to its target asteroid Ryugu then ever. In the latest photos sent by the spacecraft on June 24, 2018, it reached a distance of just 25 miles from the surface of the asteroid that has revealed a lot of geographical features and details about the asteroid. Hayabusa 2 spacecraft covered a distance of 3.2 billion km right from its launch in December 2014 in order to land on the Ryugu asteroid which is located around 280 million km from the Earth.

The spacecraft has a number of different scientific types of equipment including cameras that allow it to capture detailed photos of the asteroid. In the recent photos revealed by the spacecraft, Ryugu appears as a fluorite or an eight-sided die which is also used in the game ‘Dungeons and Dragons’. The asteroid has a unique dice-like appearance. The photos also provided details on various geographical features such as craters, boulders, rockets, etc.

Ryugu is a Type C asteroid with a width of 2,854 feet or 870 meters. It contains traces of water and other organic material analysis of which, the researchers will be able to contemplate how the solar system was formed more than 4.6 billion years ago. Hayabusa 2 will soon execute its landing procedure after which, it will collect samples from the surface as well as underneath the surface. The samples will be stored in a secure chamber in the descent module that will be sent towards the Earth in late 2020 where the samples will land somewhere in Australia that will be investigated further.

The object is unique as its rotation axis is perpendicular to its orbit. This allows the researchers the freedom to choose landing sites and operate the two rovers on the surface of the asteroid without much hassle, however, since the asteroid has large craters, the process of choosing a landing site is both exciting and difficult.