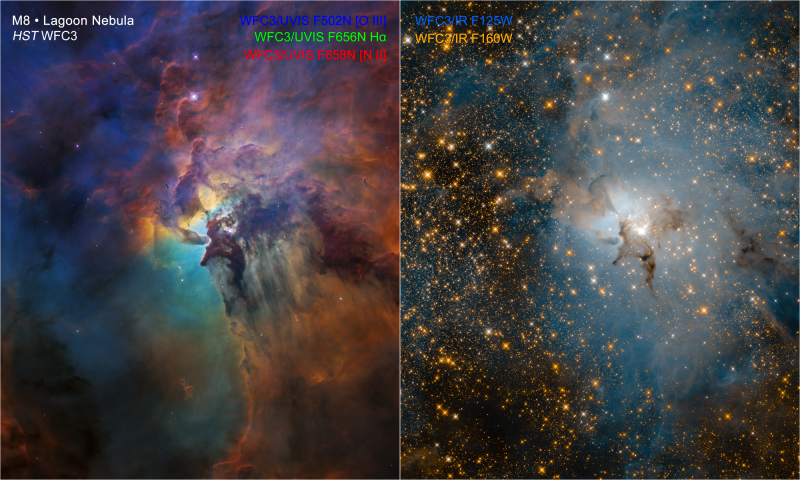 To commemorate its 28th anniversary, Hubble Space Telescope has sent a magnificent image of a gorgeous nebula located in the distant cosmos to mark its anniversary which has been a custom celebrated every April. Hubble Space Telescope, the largest ever space telescope stationed in the Earth’s orbit as of now was launched on April 24, 1990, aboard Space Shuttle Discovery. It took a day to reach into its orbit and since then, it has been piercing deep into the cosmos taking excellent images in visible and infrared lights of distant nebulas, supernovas, and other stellar objects located at an incomprehensible distance from Earth. This year, Hubble sent images of Lagoon Nebula, the magnificent stellar object is spread across 55 light-years in width and 20 light-years tall.

A joint venture between European Space Agency (ESA) and U.S. Space Agency NASA marked the launch of Hubble mission which is thus run by both the space agencies. Every April, Hubble sens images of distant stellar celestial bodies to commemorate its milestone. This year, Lagoon Nebula was chosen as the pick of the year located at an incomprehensible 4,000 light-years away from Earth. To put things into perspective, it would take an object traveling at 100% of the speed of light would take 4,000 lights to reach it.

ESA & NASA described the newly released Hubble images of the Lagoon Nebula as an object which appears to be three times larger than the extent of a full moon even though it is located at such a massive distance spanning in a region covering 20 light-years in height and 55 light-years are width. It is so colossal that Hubble was able to take just a small fraction of the entire nebula in its images which shows a star formation region spanning over 4 light-years in width. Hubble took the images in both visible light and infrared light where the latter has a wavelength so minuscule that naked eyes cannot see it without an optical aid.

The images show the extent of the star formation region with humongous clouds of dust and gas with few regions so dense that it blocks the stars in the background. The region depicts stars formation paradigm which is a continuous never-ending process of formation and collapse of stars which results in a material which is recycled into the formation of new stars. Hubble’s Wide Field Camera 3 was used to take the visible-light image of the Lagoon Nebula past February.

Hubble has been associated with fantastic observations ranging from supernovas and exploding stars and more. Observations made by Hubble were instrumental in ascertaining that the expansion rate of the universe is accelerating due to ‘dark energy’, a form of mysterious and unseen energy which forms more 60% of energy in the universe. The observation was made by three researchers in 2011 which earned the Nobel Prize in Physics.

The Hubble space telescope that was launched in 1990 was shipped with a defective primary mirror which resulted in slightly blurry images. To rectify it, astronauts had to perform a spacewalk in December 1993 in order to repair the defect discovered. Since then, there have been four servicing missions throughout two decades of its operation with the last servicing mission made in 2009. Hubble is expected to be in the operation through 2020 and ever longer. Although a bigger version of Hubble touted as the James Webb Space Telescope with a budget of $8.8billion has been commissioned and in its development phase since two decades, it will be launched in May 2020 until then, Hubble will remain the supreme leader into its space exploration making several more discoveries.