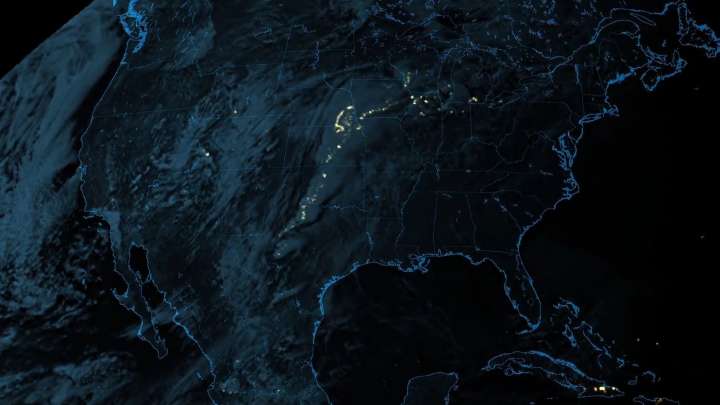 It has been two months since the GOES-17 satellite was launched on March 01, 2018. The satellite is presently under its six months checkout period. On May 9, it sent the ‘first-light’ image captured by its Geostationary Lightning Mapper (GLM). According to the official statement, GLM mounted on GOES-17 satellite monitored lightning strikes and its behavior in the western hemisphere of the United States giving a forecast on the predicted weather, formation of storms as well as whether it will intensify and grow dangerously or not. GLM released the video capturing the lightning strikes in the midwestern United States. The description of the video reads: “Rapid increases of lightning are a signal that a storm may strengthen quickly and could produce severe weather”. The video released by Lockheed Martin shows the progression of lightning strikes in the midwestern United States analyzing which, weather forecasters can detect the emergence of any storms.

After its launch, GOES-17 is currently positioned in a geostationary orbit at the altitude of 22,300 miles above the Earth’s surface. It is currently flying over the western coast of South America. Once its six-month checkout period ends successfully, the satellite will be repositioned at 50° longitude to the west so that it captures the western coast of the United States and the Pacific Ocean. The satellite is planned to stay in operation for over 15 years wherein it will monitor fires, lightning strikes, solar behavior as well as space weather, etc.

GOES-17 was launched as a GOES-R mission in order to complement the existing GOES-East satellite which has been monitoring the weather in the eastern coast of the United States as well as New Zealand to the west coast of Africa post its launch in 2016. GOES-17 will be christened as GOES-West once it is repositioned as per aforementioned. GOES stands for Geostationary Operational Environmental Satellites which have been a long-standing satellite weather monitoring mission by NOAA and NASA for years.

In the latest statement released by NOAA, the GOES-17 is suffering from a cooling problem in one of its instrument called Advanced Baseline Imager (ABI). It lets the satellite capture images in both visible spectra and in infrared wavelengths. While the satellite is still able to capture all the weather-related imagery in visible light, it has lost or currently restricted from capturing imagery in infrared wavelengths citing its cooling problem.