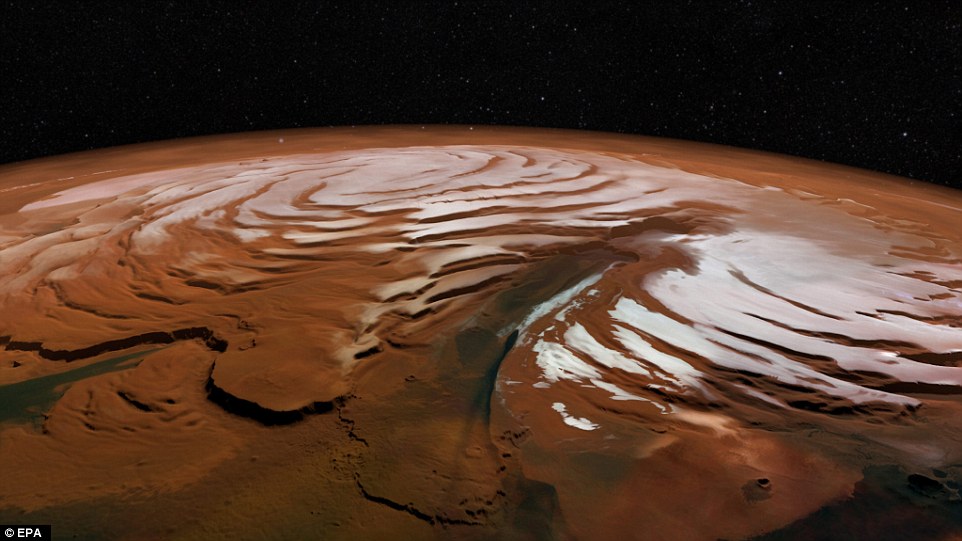 Mars, over the years, is becoming more appealing for the scientists. With each passing years, the Red Planet is proving itself not to be the bland red desert, which scientists once thought it to be. Recently, European Space Agency’s Mars Express Mission has photographed a never-before-seen feature on Martian surface. The image taken by Mars Express Mission of ESA is revealing delicate Swirls of the Ice cap at the North Pole of Red Planet.

From the new image, released by ESA recently, the swirls of ice on Mars looks like a bizarre sight – similar to the top of a massive ice cream cone at first look. However, in real, it is an ice cap of Red Planet’s North Polar. The picture is also giving a clear sight of its idiosyncratic dark spiraling troughs in unique detail. After experimenting the image beamed back by the Mars Express Mission, European Space Agency now believes that, once, the Red Planet was blanketed with oceans, ice layers, and exploding volcanoes that shoot up over the planet.

As expected by ESA, the massive channels are triggered by the chilly and melting carbon dioxide, and the channels have gotten their unique shape from spiraling winds alike to hurricanes on Earth. The assortment of views, released by ESA was created from 32 individual orbits ‘strips’ clicked between 2004 and 2010. Through the pictures, ESA’s Mars Express Mission has covered an approximate region of one million square kilometers. This image also clearly shows a comprehensible angle of the ice cap, located on Mars’ the North Pole alongside its idiosyncratic shady conduits configuring from a curved-like pattern.

The entire view is based on the pictures clicked by ESA’s Mars Express and generated data from the Mars Orbiter Laser Altimeter (MOLA) aboard the Mars Global Surveyor mission of NASA. Scientists have named the valley as ‘Chasma Boreale.’ It is 2km (1.2mi) deep and 500km (310.7mi) long.

As shown in the picture, the Martian north polar ice cap is an undying fixture of the planet, but during the winter season – which is currently going on earth – the temperatures of the region becomes cold enough and approximately 30% of the carbon dioxide in Martian atmosphere rashes onto the cap, adding up a recurrent coating, holding up to one meter thickness. Again in the summer season, most of the carbon dioxide ice directly converted into gas and broke out into the atmosphere and left the water-ice layers behind.