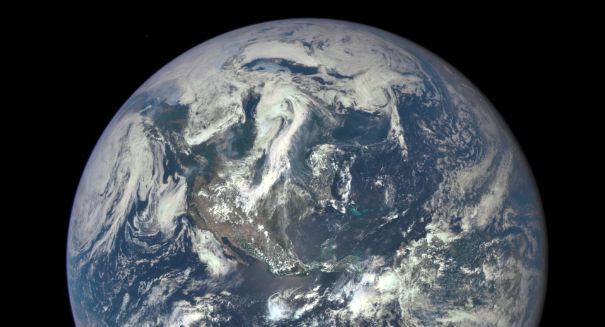 During the Great American Eclipse in August 2017, the scientists have discovered some strange thing which looks like a boat. It was like a ship floating on an ocean. That thing was detected in the ionosphere by the researchers at the Massachusetts Institute of Technology and the University of Tromso in Norway. Well, the scientists named that strange thing as bow waves.

As per the report, the moon blocked the heat coming from the sun when it comes in front of the sun during the eclipse. When The moon moved out from the sun, that time it created bow waves effect in the atmosphere. During solar eclipses, the moon’s shadow causes a large reduction in atmospheric energy input, including not only the stratosphere but also the thermosphere and ionosphere. The eclipse shadow has a supersonic motion which is theoretically expected to generate atmospheric bow-waves, similar to a fast-moving river boat, with waves starting in the lower atmosphere and propagating into the ionosphere, mentioned in the study report.

The scientists took help of some Global Navigation Satellite System receivers from 2000 sensors networks. The scientists stated that it is safe and will give many opportunities to various research work.  The first unambiguous evidence of bow waves as electron content disturbances over central and eastern US, with 1-hour duration, 300–400 km wavelength and 280 m/s phase speed emanating from and tailing the totality region.

Shun-Rong Zhang from the MIT Haystack Observative who is the study author said that the scientists were looking at some phenomena that were expected but never had the chance to be observed. He further added that the team had a large coverage and the satellite system is sensitive enough to be able to see these smaller variations. The study has revealed that there is some interconnection between the Sun, Moon, Earth’s atmosphere, and ionosphere and looks like community interest.

In August, Joshua Semeter professor of electrical and computer engineering at Boston University had stated that “It’s like a controlled experiment.” “Mother Nature is providing us a nice experimental environment,” he further added.

As per the Smithsonian Institute, bow waves in water create drag force that slows down the object, and in the case of large ships, can pose a risk to smaller boats, especially in a harbor. Streamlined shapes, mimicking those found in nature, are designed to produce as small a bow wave as possible.

An object moving through the air, or the rarified gas in the solar system, a galaxy or intergalactic space, of space, creates a series of pressure waves, or sound waves. When the object travels at the speed equal to or greater than the speed of sound in the gas, these waves merge into a 3-dimensional bow shock, or shock cone. The width of the bow wave or shock cone depends on the speed of the object. The faster the object travels, the narrower the cone becomes.

Astronauts at the ISS celebrate Christmas with unwrapping gifts and a special meal
Breakthrough of 2017: What happens after neuron star collision stun scientists!