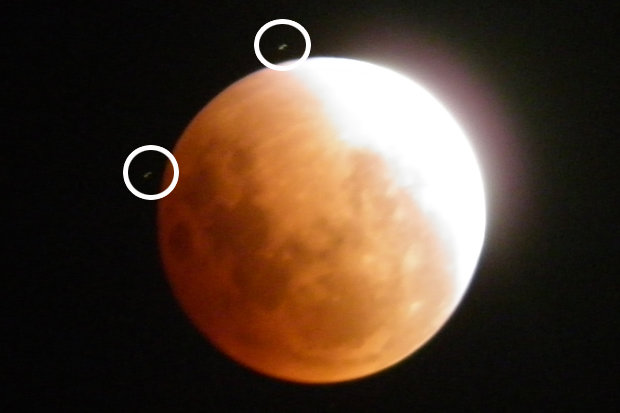 The 31st January night was a spectacular sight for sky gazers, but for some, it was more than just a spectacular sight. The live feed of the ‘Super Blue Blood Moon’ came in with a mysterious object zooming past the moon as people looked at the beautiful coppery glow of the moon. Conspiracy theorists suggested that this object could be none other than a UFO as no technology made by a human could ever move past the moon at such high speed.

A video clip of this mysterious object has been uploaded in the space conspiracy channel in YouTube named UFOmania which showed a white spot in the video zooming across the red moon. The video has garnered about 40,000 + views after 24 hours of being uploaded. The people who saw the clip agree that this thing could be nothing but a significant proof of alien life.

A witness who saw the live feed stated that a white object could be seen traveling at a lightning fast speed alongside the left half of the moon in a downward direction. After a certain point, it could no longer be seen as it went out of frame. The peculiar thing about this object was its trail that had a pulsating light which flashed at regular intervals like someone was controlling it.

The video went viral within hours, and conspiracy theorists state that NASA is aware of the fact that extra-terrestrial life exists in a world beyond our Earth but for some unknown reason, the scientists and officials want to keep it a secret.

When on one side the video is receiving positive comments regarding the presence of alien life, skeptics suggest otherwise stating that this object could be a weather balloon or any Boeing aircraft but not any UFO. However, no official statement for the same has been provided by NASA officials.

Another such event was seen by Luis Verdiales, an amateur astronomer from the city of Puerto Rico during the penumbral eclipse of the moon in the year 2017 in February. However, this black disc-like structure acted just opposite to the one seen during the Super Blue Blood Moon. It was slow, unlike the white structure during this year’s event. The object was moving too slow which ruled out the possibility of it being a satellite. However, the event was studied by experts from aviation and turned out it was Google’s balloon.

Earth was set on massive firestorm by humongous comet that led to Ice Age 12,000 years ago
Earth’s magnetic poles can switch in future with severe consequences, ESA scientists warn