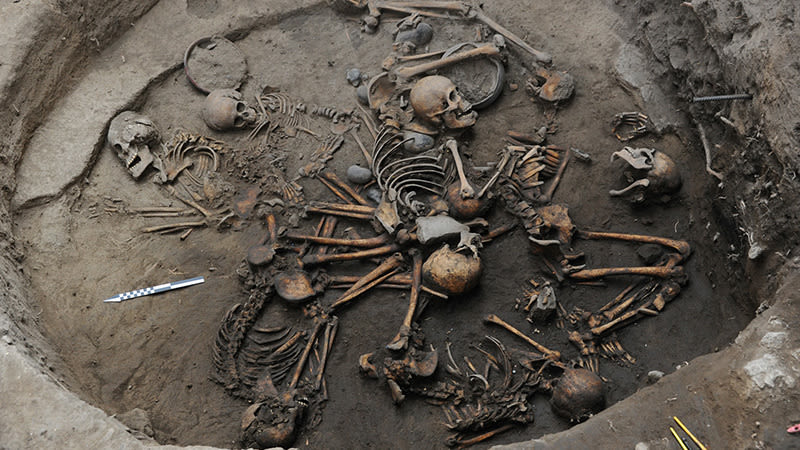 A recent discovery of skeletons in a burial ground in Mexico has managed to baffle the scientists. The thing that has grabbed the attention of the researchers is the peculiar circular/spiral arrangement of the skeletons with arms that are interlocked together suggesting a ritual based burial. These skeletons have been estimated to be 2,400-year old.
Scientists have unearthed a total of 10 skeletons including those of children as well as adults. The skeletons were found in Tlalpan, a city located in southern frontier of Mexico. After a study of the skeletons, researchers have confirmed that two out of the ten skeletons belong to the female gender while one was a male. The rest of the skeletons are currently being studied. However, most of these skeletons belong to children out of which the scientists have been able to identify a skeleton of a baby who was around one-month-old while another child was between the ages of three to five.

The study was conducted by scientists belonging to the INAH, which is short for National Institute of Anthropology and History. As stated by National Geographic, the skeletons were located under a certain building that once served as classrooms, chapel as well as dorm room for the priests. The unique pattern of skeleton alignment suggests that the bodies were arranged in a theme relevant to some ancient pattern of burial followed in the past.

The formation closely resembles a wheel with an obvious concentric point with the bodies lying on their sides. The researchers speculate that this typical arrangement could have been centered on a figure of an ancient god or any such deity that was once worshipped by the Mexicans.

A researcher from the Pontifical University of Mexico, Jimena Rivera Escamilla stated that the alignment of the bodies suggested that they were placed one upon the other. Say, for example, the head part of one of the bodies is lying upon the chest part of another body, or the hands from one body have been placed upon the back of another and so on.

Escamilla also stated that the individuals could represent the circle of life that starts from a baby growing into a child followed by being an adult and ultimately the death of that particular individual again to start with the baby phase.
The researchers have been unable to determine the cause of their death, or the relationship shared between them. Bone dating process revealed that these folks belonged to a period that predates the Aztec Empire that came into existence close to the 16th century. The skeletons have been estimated to be from the Pre-Classical period in Mexico.

The bodies were also seen holding earthen bowls and pots. The researchers also located some ritual based deformations in the teeth and skull which was usual back in the days when culture played a very significant part due to lack of modern science. Scientists suggest that this skeleton ritual might have been performed by the hunters and gatherers that existed in the villages during the ancient time.