Elon Musk, the founder of SpaceX, told late night host Stephen Colbert about how he thinks and hopes that thermonuclear explosions could be used to jumpstart the Martian atmosphere that would further support life. The said process is called terraforming and it is not something new for science fictions readers and moviegoers as there are plenty of movies that have mentioned this term. Terraforming actually means converting any another planet into an Earth-like habitable planet with a thick environment where people could roam without putting the bulky spacesuits on.

Unfortunately, terraforming isn’t feasible with the available technology according to a new research backed by NASA where researchers involved in the study curated how terraforming could be done on the Martian surface and what change it could introduce and sadly, the observations aren’t motivative.

Martian surface is made up of carbon dioxide, however, the quantity of CO2 gas on the red planet is not enough to blanket the atmosphere and trap heat within the planet that could increase the temperature of the planet and make it warm. Since CO2 in the Martian atmosphere it too thin and cold to support water in liquid form, it isn’t feasible as a habitable planet. Further, the Martian atmosphere is about 0.6 percent than that of Earth’s atmosphere that allows the CO2, H2O, and other required nutrients to evaporate and escape to space. 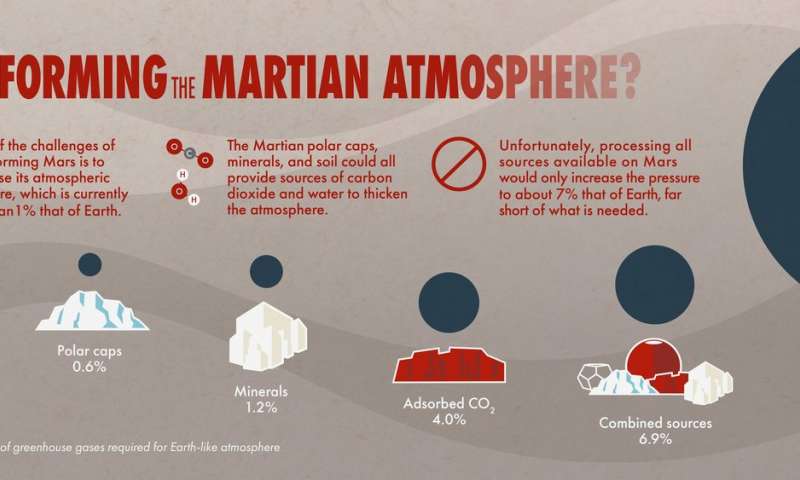 According to Bruce Jakosky from the University of Colorado who headed the study which is now published in the journal Nature Astronomy, both CO2 and water vapor (H2O) are the greenhouse gases available on Mars in abundance can provide greenhouse effect which is similarly how Earth is facing the threats of global warming due to the greenhouse effect.

There are plenty of ideas on how to increase the atmospheric pressure on the red planet that would allow the astronauts to explore the planet freely without depending on the spacesuits. Researchers took the data on the possibility of terraforming that was done before and took the data observed and recorded by various spacecraft for the last 20 years provides intriguing details on how and how much gas escapes to space, the vaporization of H2O and CO2, etc.

According to the study, there isn’t much CO2 available on and in the Martian surface that can provide sufficient greenhouse warming effect to lower the planet’s temperature and increase atmospheric pressure.

Proponents have suggested that releasing the CO2 trapped in the polar caps on Mars can help put the gas in the atmosphere to increase the pressure required for a habitable planet for people. Researchers have also stated how vaporizing the caps with dust to absorb more solar radiation or by inducing massive explosions that would release CO2 gas in the atmosphere. They found out that even after all the polar caps are vaporized, it would increase the atmospheric pressure to 1.2 percent that of Earth’s atmospheric pressure which isn’t much a greater change.

Further, researchers also observed how heating up the dust particles in the Martian soil that can increase the pressure but they found out, it would only contribute 4 percent of atmospheric pressure compared to the Earth. Moving further, the researchers studied how they can extract and release carbon dioxide from the minerals found on and below the surface of the red planet where even if the researchers are able to scrape of till the depth of 100 yards of soil, it would only increase the martian atmospheric pressure by less than 5 percent which isn’t enough to sustain life.

They found out that rich-CO2 content minerals buried deep in the surface would not be possible to extract with current technology where the needed temperature to release it exceeds the 300° Celcius mark which is way beyond comprehension. Spacecraft and orbiters sent over the years have found a lot of data about the existence of ancient lakes on the Martian surface for which, the dry riverbeds and abundant mineral deposits can be observed on the red planet. However, the atmosphere and vaporized water were stipped away from the planet due to solar wind and radiation.

If you think that these findings will put an end to the dream of harboring the red planet to set up colonies as it is not possible with the current technology. Soon, researchers will find out ways to release enough carbon dioxide so that the atmospheric pressure is equivalent to the Earth and the technology is advanced enough to let humans live on the planet.

US Online Pet Food and Supplies Market Size, Analysis, Opportunities and Future Prospects 2026
Oumuamua is not an asteroid, researchers reclassify it as a comet