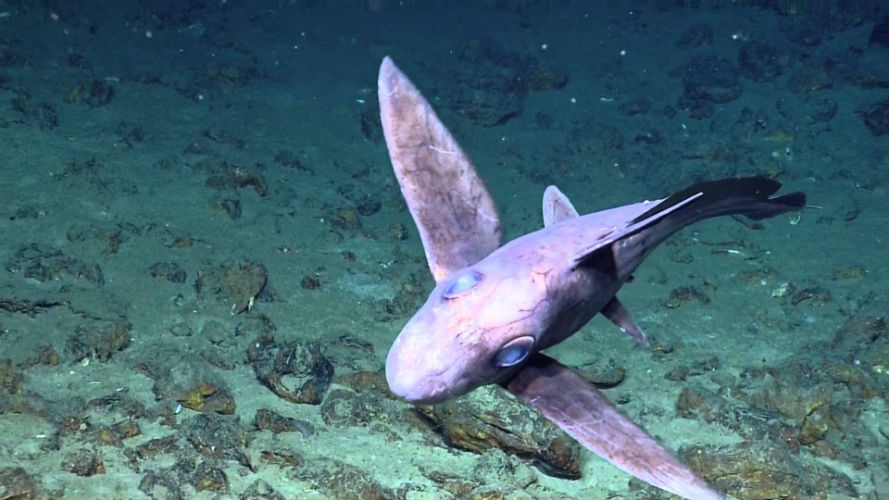 Like described in Greek Mythology, a rarely seen Ghost Shark recently caught on camera is giving some major goals about the unknown and interesting facts about marine life. A Ghost Shark or pointy-nosed blue chimaeras, for the first time was captured on cameras alive off the coasts of Hawaii and California. Like its Greek Mythological namesake, the filmed shark is quite mysterious, hardly ever seen maritime creature having a number of bizarre characteristics.

The video giving the glimpse of the pointy-nosed blue chimaeras was actually filmed in 2009 but kept buried from the general public because of further research and experiment. But recently, the video was published by the ‘Monterey Bay Aquarium Research Institute’, alongside an academic journal made by the researcher Lonny Lundsten and his colleagues at the institute.

Six years back, in 2009, a group of researchers from the nonprofit organization sent a Remotely Operated Vehicle or ROV to click snaps and videos of several marine animals off the waters of central California and Hawaii. The ROVs captured video footage from different angles of the sea and went depths of up to 6,700 feet. Among all the filmed clips, researchers found an unusual and surprising footage, filming a rarely seen creature that appeared to be a type of ghost shark. Previously such ghost sharks were only seen in the Southwestern Pacific Ocean.

In spite of the comparable physical characteristics to the pointy-nosed blue chimaera, till now, the lead author of the study, Lundsten and his associates from the Monterey Bay Aquarium Institute haven’t yet been 100% assured that the mysterious species captured in the footage is a ghost shark. And due to this, the paper named this Goliath fish as Hydrolagus cf. trolli, despite of its scientific name, Hydrolagus trolli.

As described in the study, Lundsten explained the video clip and discussed the characteristics of the mammoth shark with three chimaera experts. Surprisingly, all of them verified the creature to be a pointy-nosed blue chimaera. However, still, there are some points and factors which are yet to be tested before verifying the fish to be a pointy-nosed blue chimaera or ghost shark.

Watch the video of Ghost Shark below:

The mystery of wailing noise recorded 3600 Feet down in Mariana Trench solved
NASA to develop ‘Restore-L’ to grasp, renovate and refill fellow robots