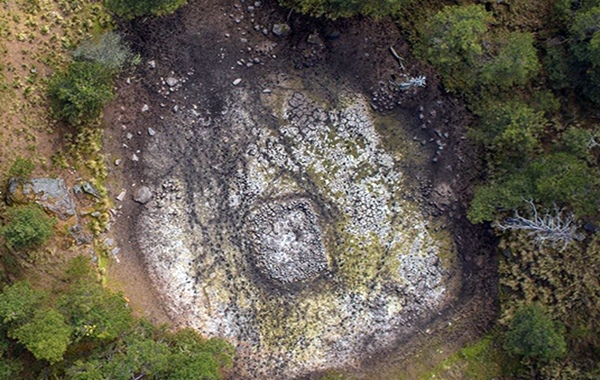 A team of archeologist has discovered an old Aztec stone structure which looks like a mini model of the Universe in Mexico. This was discovered at the bottom of the Iztaccihuati volcano by the archaeologist team from the National Institute of Anthropology and History (INAH).  Apart from this the team also has found ceramic fragments, lithic material, and lapidaries from the spot. All these things are associated with the rain God in ancient Aztec culture, Tlaloc.

The existence of a Tetzacualco in the middle of a pond and the optical effect of the structure that occurs when the water mirrors, is suggesting about the ancient time and space and tiny model of the universe, INAH informed.

The ceramic materials those were found on the spot, it includes Coyotlatelco of 750-900 AD, Mazapa of 850 to 900 AD and Tollan Complex of 900-1150 AD. These were spread around 300 by 100 meters area, informed Iris del Rocio Hernandez Bautista, an archaeologist from the Subaquatic Archaeology Sub-directorate at INAH. The whole mini model of the universe was found at the height of 3,870 meters or 13,000 feet near the dormant izataccihuatl volcano. Since 2016, the INAH has been working there on a project. Iris stated that some channels were regulated the flow of water inside the structure and it created the optical illusion. The illusion was like the stones were floating on the water which shows the ancient time and space.

Different from modern science, the concept behind the creation of the universe for Aztec civilization is totally different. For them, a monster of the earth named Cipactil was the creator of the universe, and that creature also formed the earth and sky.

The researchers also have found blades, slate pieces and some objects made with pink and gray shale, tripod bowls. All were arranged in a manner like they were offering something to God. It is expected that groups of people who had worshipped nature were living in that area. Well,  it is the quite interesting thing that there were many mythologies behind the formation of the universe and the team is now trying to find out more about it.