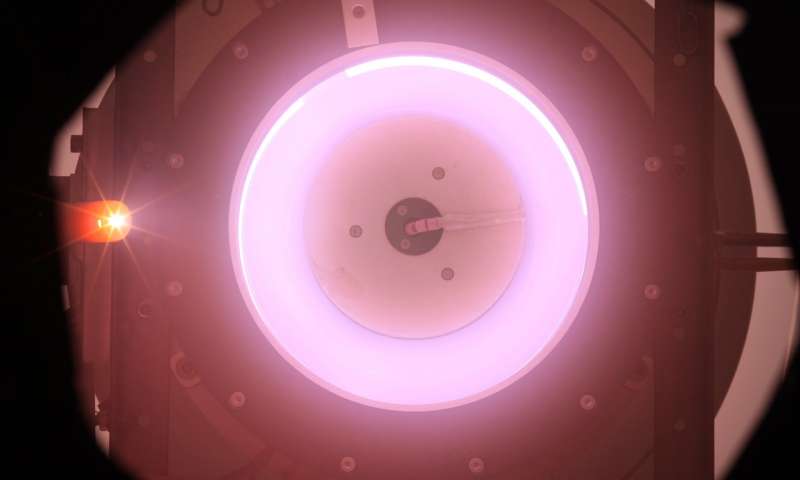 The European Space Agency has achieved success in building air-breathing thrusters that can be used in space. For the first time ever, the ESA team has successfully built and test fired an air-breathing electric thruster. This electric thruster will use the scarce amount of air molecules found in the upper atmosphere of the Earth to propel the satellites present at a very low orbit of Earth. Normally the satellites operate in space owing to the Sun’s Energy. But, the scientists at ESA have developed an engine that can fire itself without oxygen. That means the engine can act as a propellant for the satellites moving in the very lower-Earth orbit.

The new air-breathing thruster will work on electricity and will fuel the satellites for years on end. The electric thruster has no moving parts and its job is to collect the air from the upper atmosphere, compress it and then give it a charge. Once the air is charged, it will squirt out to provide thrust to the engine. This concept was previously used by ESA on its GOCE gravity-mapper that flew as low as 250km from Earth for more than 5 years. This electric thruster carried 40kg of Xenon gas to help get the thrust so that it could change the altitude if it orbit becomes low. Once the xenon gas was exhausted, the mission came to a halt.

But ESA’s latest air-breathing electric thruster can thrust the satellite for a longer period of time as it will use air molecules as a propellant. Explaining about their latest electric thruster project, ESA’s Louis Walpot said, “This project began with a novel design to scoop up air molecules as propellant from the top of Earth’s atmosphere at around 200 km altitude with a typical speed of 7.8 km/s.” The researchers informed that a complete thruster was built by Sitael in Italy and it was tested in a vacuum chamber in their test facilities in an environment that mimicked the upper atmosphere situated at an altitude of 200km.

According to the researchers, the main challenge for them was to collect the air and compress it instead of allowing it bounce away. So, the Ram-Electric Propulsion intake designed by QuinteScience in Poland was considered. This intake system collected the air molecules and gave them electric charges so that they could be accelerated and ejected out to provide the thrust. The electric thruster that Sitael built is a dual-stage thruster which can increase the efficiency of charging and acceleration of incoming air.

This ancient reptile could separate its tail to evade its predators
Scientists debunk the mystery of formation of Moon!