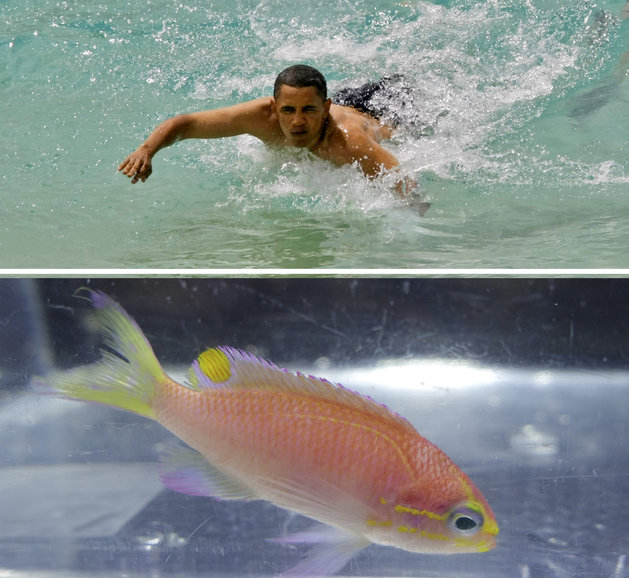 A new species of fish discovered from Papahanaumokuakea Marine National Monument, located at the United States of America is named in the honor of former president of USA, Mr. Barak Obama. When scientists first discovered this new fish creature, they were shocked to find a distinctive and multicolored mark near the tail of the fish. The multihued spot carries a striking similarity to the campaign logo of Barack Obama and hence, in the honor of him, the researcher named the new species of fish as “Tosanoides Obama”.

The previously discovered fish species, which was found in Papahanaumokuakea Marine National Monument, is now dubbed as ‘Tosanoides Obama’, in the honor of Barak Obama. During a journey of National Oceanic and Atmospheric Administration (NOAA) to Papahānaumokuākea Marine National Monument in the remote Northwestern Hawaiian Islands in June 2016, the new fish species was discovered by the researchers. The new set of small pink and yellow coral-reef fish are exclusive to the protected marine area in Hawaii.

On 26th August 2016, at the influence of the Hawaii Democrat Senator Brian Schatz, and multiple other marine scientists and conservationists, the former president of USA, Barak Obama had extended the Papahanaumokuakea Marine National Monument and to tribute this humanity of Obama, the scientists named the new fish species after his name.

Spilling light on this matter, the lead author of the study, Richard Pyle Bishop Museum scientist, “In order to remember and recognize the noble effort of Barak Obama, we decided to name the new species of fish after the name of Former-President Obama. His continuous effort to shield and conserve the natural territory of Papahanaumokuakea Marine National Monument and its expansion has made us giving him this honorable tribute. The development of Papahanaumokuakea has added a new coating to the integrated protection level to the great backwoods locations on Earth.”

While giving details of the Obama fish, Pyle added, Male Obamas are enriched with a distinctive mark on the dorsal fin close to the tail, which has a blue edge and red with yellow stripes in the center. The mark is quite similar to the campaign logo of Mr. Obama.

The complete details of the fish and its naming process are encompassed in a study published in the open-access scientific journal ZooKeys.