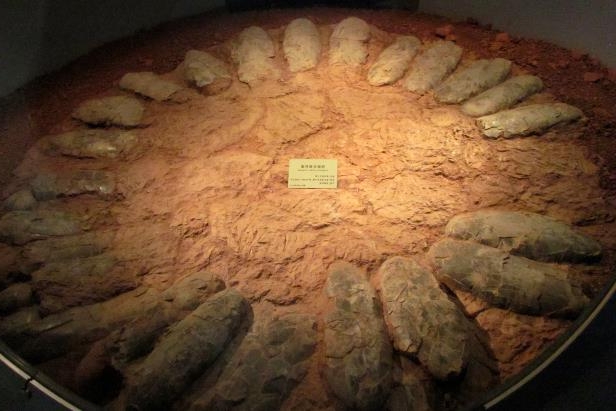 Modern birds incubate their eggs while sitting on it and pamper it until they hatch. Similarly, some dinosaurs species used to hatch their eggs by building nests and then incubate it while sitting on it. This thought has raised an intriguing question whether how would a dinosaur weighing more than a ton brood their eggs without actually crushing them under its own weight. The recent study published in the Biology Letters might have answered the puzzling question which could help scientists understand the incubation strategy followed by these dinosaurs.

According to Kohei Tanaka, a researcher at the Nagoya University Museum and the lead author for the findings, large species of dinosaurs might not have sat directly on their eggs. To explain further, researchers took Oviraptorosaurs which are feathered carnivores dinosaurs that lived about 80 million years ago. They found out that these hefty dinosaurs weighing between 100 kgs to 1.4 tonnes would arrange their eggs in a circular pattern leaving a large central opening. The eggs that were found in China recently demonstrated that the eggs were in the shape of potatoes with the size of up to half-a-meter and weighing 15 pounds each were arranged as of it leaves a large central opening.

The prevent the eggs from squashing down under the weight of the dinosaurs as well as protect the eggs from any predator or any other foreign elements, although it might not have provided required warmth in some cases. The study points out towards Theropods which is a group of carnivorous dinosaurs from whom the modern birds are descended that includes T-rex as well who would lay eggs. Of all the Theropods, some of the species would build nests and that is a Oviraptorosaurs which includes turkey-sized Caudipteryx to the humongous 1.4-tonne Gigantoraptors.

The findings also state that the incubation strategy followed by these theropods were later evolved in modern birds as well. Oviraptorosaurs would live in the Cretaceous period which dates back to 80 million years when it the comet or asteroid is believed to have stricken and wiped all of the non-avian species for which, the researchers have found evidence and fossils. According to the study, the fossilized eggs discovered in China revealed that these hefty oviraptorosaurs used to sit near their eggs and not directly on top of it.

Further, dinosaur nests as one found in China give a great amount of insight into the behavior of the extinct species of dinosaurs as well as how they evolved and other helpful information. Earlier, paleontologists christened the oviraptorosaurs as eggs-stealing dinosaurs which are why they are also known as an egg-thief lizard.