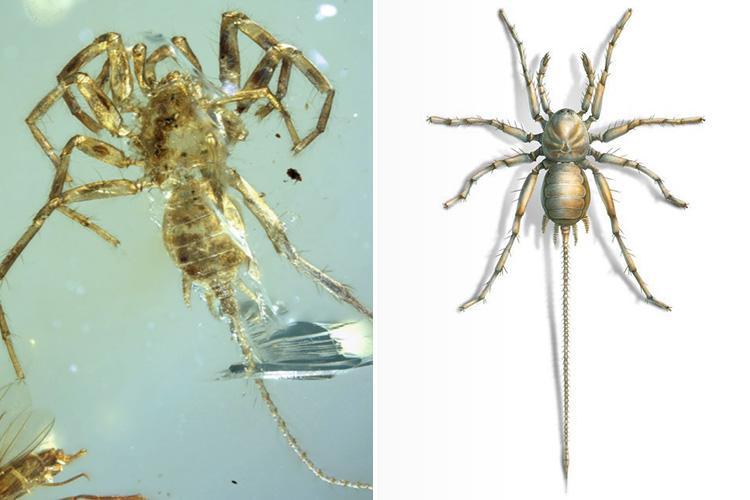 The fossilised remains of ancient arachnids beautifully preserved in the amber located in Myanmar reveals a lot about the ancient Earth dwellers. Researchers confirmed that these arachnids flaunted a tail, unlike their modern relatives. These ancient spiders belong to the species Chimerarachne yingi that thrived on the Earth’s surface during that Cretaceous period around hundred million years before today.

The study of the fossilised remains was published in the journal Nature Ecology and Evolution that stated that the modern spiders have evolved from the ancient arachnids. About 4 specimens of the arachnid were found on a Monday. The fossil suggested that the arachnids had a similar set of traits as the modern spiders including spinneret which is a structure in the spider’s body to help in the production of silk. However, the features also included a long-lost tail that was filled with short hair like structures. These hairs were used to sense any disturbances in the surroundings that included prey and predators.

Bo Wang, a palaeontologist from the Chinese Academy of Sciences stated that the fossilised remains in the amber are an essential key to understand the mystery behind the origin of spiders. These fossils probably belong one of the earliest species of spiders that states that the tailed spiders originate during the Paleozoic era to survive till the Cretaceous in the Southeastern periphery of Asia.

The Chimerarachne was divided into two parts where the larger section of his body comprised of the tail, while the smaller one comprised of the rest of the body. The ancient spider looked fierce but was very small with a length of about 7.5mm. Paul Selden, a palaeontologist at the Kansas University stated that the Chimerarachne could be the missing link between the present spiders and the earliest one that flaunted tails but lacked the presence of a spinneret. It would be an interesting discovery to find how the spiders modified their bodies to develop these spinnerets.

Selden further said that the Chimerarachne could easily be tagged as a prehistoric spider that could not be noticed easily due to its small size. The pre-historic group of arachnids comprised of scorpions, spiders, ticks, mites and so on. These arachnids dated more than 420 million years prior to the modern era. However, the earliest known type of true spiders known to man-kind existed 315 million years before the present day.

All the specimens of these spiders were males who might have been looking for a female to mate with. The study places the modern-day spiders at a different place on the family tree of the arachnids. With a tail on the back, the Chimerarachne settle at a slightly rare spot. The experts that took part in the study have essentially removed the possibility of the presence of a modern version of the insect with tail on its back which solidifies the fact that modern spiders might just have lost their tail along the way of evolution.

Sue, the most iconic T.rex, starts shifting to her new home at the Chicago Field Museum
Earth is changing its magnetic poles gradually, ESA warns