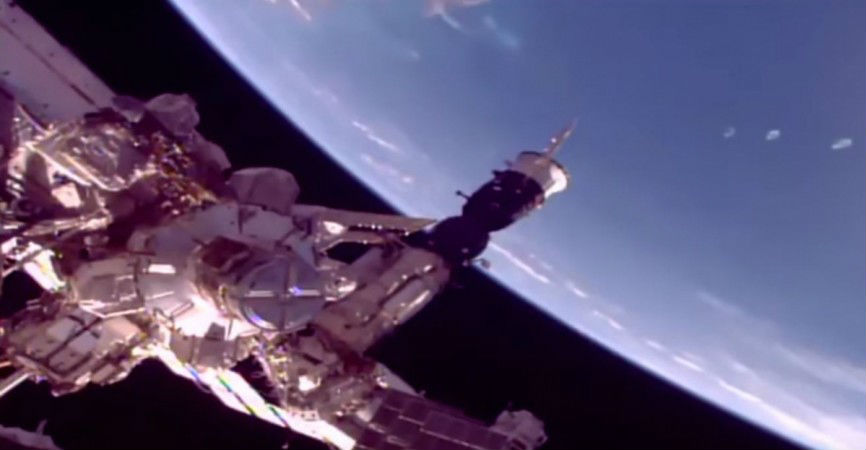 In an astonishing find, alien hunters have discovered three Unidentified Flying Object (UFO) flying near International Space Station which suggests that Earth might not be the only place in the universe to possess life and alien life might exist on some distant planet. Alien seekers were watching the NASA live feed when they spotted three mysterious objects flying near ISS, and they have recorded the video for the proof.

Youtuber Third Phase of Moon has made a video and uploaded it on the official channel where one can clearly see three white colored hemispherical objects lingering around ISS. “We’ve got three strange anomalies drifting downwards just above the Earth’s atmosphere. Is this something extraterrestrial?” said the commentator in the video. The Youtuber has zoomed the image for people to see it clearly.

Such objects have appeared near the ISS in the past, but officials from NASA have called it a lens flare. However, according to the Third Phase of Moon, the object could not be lens flare nor be clouds. He firmly believes it to be proof of extraterrestrial life.

More importantly, he believes that they are intelligent life form as they know how to build spaceships to visit Earth from a different galaxy; which also suggests that they might be superior to humans on Earth and can pose a danger in the near future. Some conspiracy theorists claim that we need to improve our defence system to protect us from future wars with aliens.

Moreover, the video has mesmerised space enthusiasts and people from all around the globe, and they are asking for an explanation from the US space agency. However, no word has come from NASA yet.

This is not the first time that UFO has appeared in the ISS live feed. Previously too, mysterious objects have appeared in the live feed many times, and NASA has cut the feed calling it to be a technical glitch. Once, astronomer aboard ISS was caught using a codename for the UFO as ‘Gospel’. Also, many conspiracy theorists claim that alien regularly visit International Space Station, and NASA knows about the existence of extraterrestrial life, but somehow they are hiding the truth from the people on Earth.