Home » News » Space » Pac-Man fever gets to the Mars 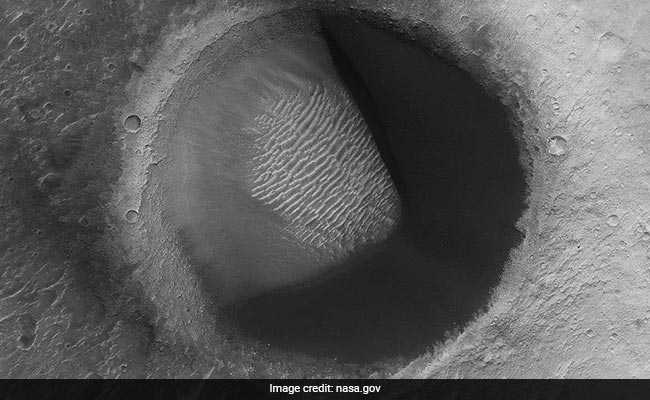 Pac-Man is a widely popular arcade game but its fever is not limited to the Earth only. Recently, NASA and HiRise team from the University of Arizona published a photo of the Martian surface showing a combo of dune and crater. This crater-dune combination is called Barchan Pac-Man as it resembles the protagonist of the hit arcade game Pac-Man.

According to the reports, the image showcases dunes inside an impact crater. The barchan shaped sand dune inside the crater resembles a crescent shape that has allowed it to appear as the popular video arcade game character of Pac-Man. The term Barchan was coined in 1881 by a Russian naturalist Alexander von Middendorf after he came across similar crescent-shaped sand dunes in Turkestan.

The image was captured by the Mars Reconnaissance Orbiter (MRO). The crater-dune duo is unique since the sand inside the crater will be blown out for tens of thousands of years which is its characteristics. Mars is not just a red-tinted desert with red rocks and craters after all. Mars is touted as the next habitable planet after Earth for which, space flights are being developed as soon as 2022 when companies like SpaceX will start conducting preliminary test flights followed by an actual manned mission in the future. Other companies including NASA will join the suit in the future as well.