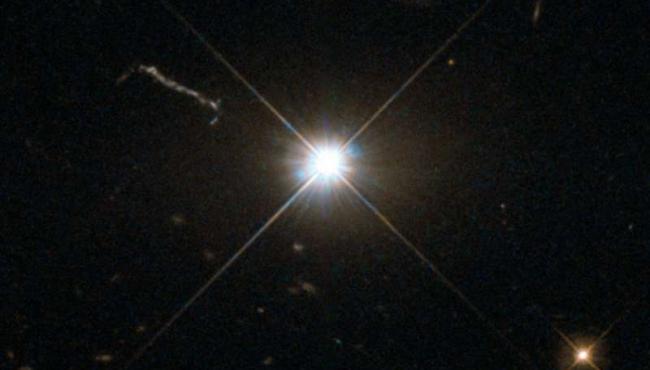 Researchers at the Australian National University (ANU) have come across the fastest-growing black hole in the known universe. The supermassive black hole is located around 12 billion light-years from the Earth making it one of the black holes that formed right after the Big Bang. The supermassive black hole is estimated to be the size of 20 billion suns. Further, it is estimated to eat a mass equivalent to one or two suns in every two days emanating radiation in vivid wavelengths on the galactic scale.

According to the lead researcher Christian Wolf of the Australia National University, this particular black hole is rapidly growing and it has been shining thousands of times brighter than an entire galaxy. The reason behind its vibrant brightness is the friction and heat caused due to gases that it sucks daily. He further added that if this black hole was placed in the center of the Milky Way, it would appear 10 times brighter than a full moon on a clear night. The presence of such a massive black hole would wipe out the existence of all the stars in our sky while appearing as an incredibly luminous pin-point star in the sky.

Most of the supermassive black holes in the known universe aren’t actively devouring matter and producing radiation as a byproduct but they can easily swallow a star that wanders too close to them. When such event happens, the stellar objects travels into the black hole and produces temperatures up to millions of degrees. This produces distinct X-rays which can be detected using specialized instruments like spectrograph. Researchers found both radiated X-rays and ultraviolet light emitting from it and it was later confirmed using the spectrograph as well.

In scientific term, the energy produced by this newly-discovered supermassive black hole is called quasar which contains both ultraviolet and x-rays. Wolf stating that if this black hole was at the center of the Milky Way, it would be impossible for life to thrive on Earth due to an unbearable amount of x-rays emanating from it. Researchers at the ANU employed SkyMapper telescope to scan this black hole for which, the findings are published in a competent journal titled as “Discovery of the most ultra-luminous QSO using Gaia, SkyMapper and WISE”.

Researchers are still unaware of how this black hole grew so large in a short span so quickly. This has triggered further investigation about their stellar object. Wolf asserted that they are scanning through the cosmos to find out even faster-growing black holes since these objects can be used as a placeholder citing their extreme brightness in order to study the formation of elements right after the Big Bang took place over 14 billion years ago.

They stated that the newly-discovered object is so bright that they can see shadows of objects i.e. stars and other stellar objects in front of the black hole. The data collected will help astronomers strengthen their knowledge regarding the types of black holes and much more.