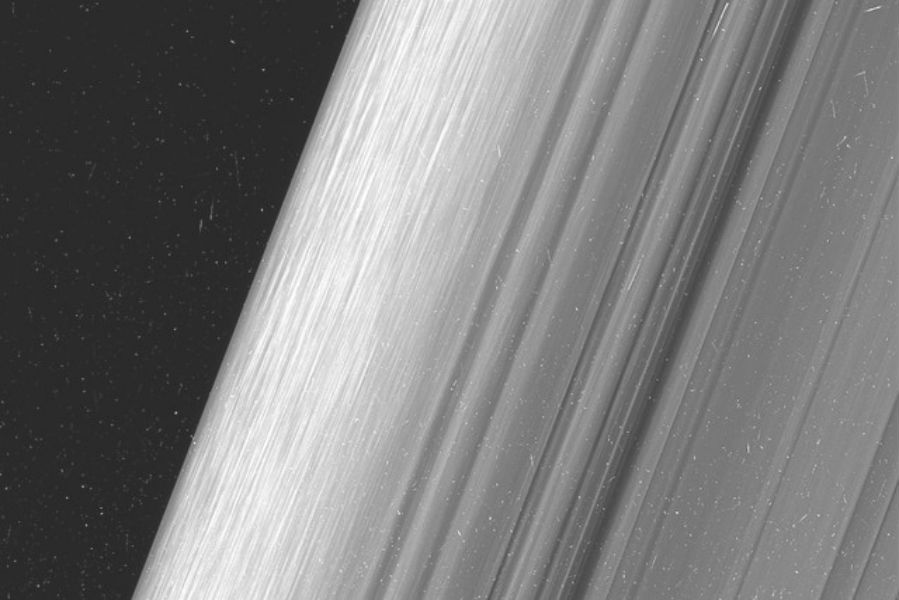 NASA’s iconic Cassini mission that is currently conducting a series of courageous ring-grazing dives as the mission is inching closer to a historic end in September has beamed back a spectacular view of the sliver of the sunlit atmosphere of Saturn with its icy rings, spread out across the forefront of the planet as a dark band.

NASA’s Cassini space probe, which was launched into the orbit 1997, is currently moving through its concluding stage. As the spacecraft is running out of fuel, the administrating agency – NASA has decided Cassini take a voluntary plunge into the atmosphere of Saturn, and this dive will mark the end of its heroic 20-year-long journey in space. Currently, the spacecraft is executing a series of jumps into the gap between Saturn and its spectacular rings for finding out new details about the narrow space.

During one such dive, on 31st March, the spacecraft has managed to frame a stunning view of an un-illuminated side of the Saturn’s rings from nearly seven degrees underneath the ring plane. Cassini clicked the image in green light with the help of its onboard wide-angle camera on 31st March. As claimed by NASA, the picture was clicked from an approximate distance of one million kilometres from Saturn.

NASA after receiving the image from Cassini has published it public access. In the picture, the view of Saturn’s ring is clearly visible in an encircling position to the planet. Due to the sliver of Saturn’s sunny atmosphere, the rings are appearing in dark shade and are seen stretched across the foreground of Saturn as a black hoop. As said by NASA, the view is one of the best sights captured by Cassini ever.

As officially confirmed, Cassini because of a deteriorating fuel supply has entered into the Grand Finale phase of its 20 years old mission. As planned by NASA, the spacecraft will take a total of 22 dives into the rings of Saturn during its grand finale phase during which it will conduct a number of dangerous passes through the narrow gap, positioned in-between Saturn and its inner rings. On September 15, 2017, the spacecraft will intentionally destroy itself by diving into the atmosphere of Saturn so that the risks of accidental colliding with other spacecraft and contaminating one of Saturn’s moons can be avoided.