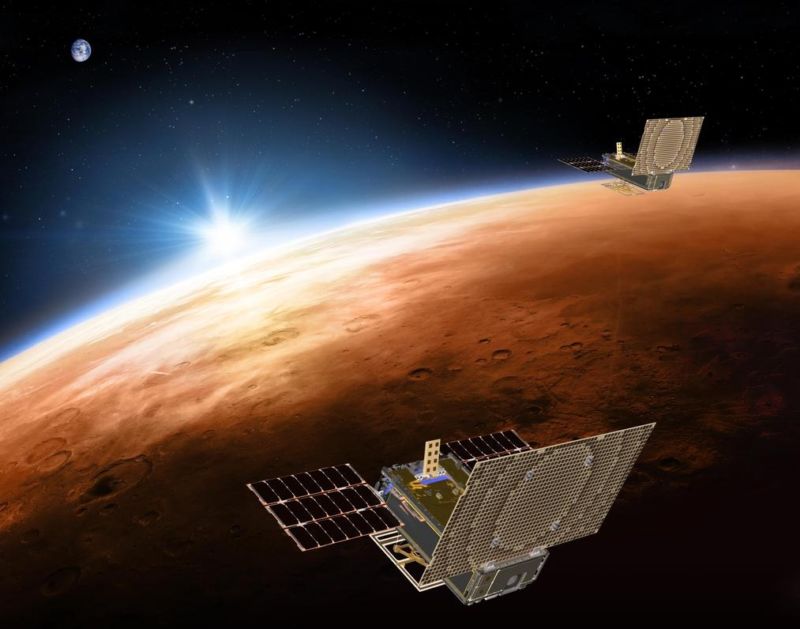 Spacecraft and satellites are bulky and large in size and of course, expensive. On the contrary, CubeSats are a small, lightweight and inexpensive piece of hardware that can perform any specific function in the space as programmed. According to the reports published pertaining to NASA’s recent Mars launch, the two CubeSats sent into space towards Mars along with Mars InSight lander has recently performed successful trajectory correction maneuver and in just weeks after its launch, these CubeSats have covered more distance than any other CubeSats ever sent.

The two low-budget spacecraft are named as MarCO-A and MarCO-B which are part of Mars Cube One project were sent on the same rocket as the massive and bulky Mars InSight lander was sent into space. Mars InSight lander completed its trajectory correction maneuver a few weeks ago while the two CubeSats recently pulled off the gigantic task which will put these spacecraft a step forward towards reaching the red planet. When launched into space, trajectory correction maneuver is performed in order to refine the course of the trajectory towards the red planet which is important in case the launch or any other factor has thrown the spacecraft off course.

Mars InSight lander completed its course correction a few weeks ago, however, MarCO-A and MarCO-B completed their course correction recently as the fact that it is not necessary that all these satellites will reach Mars at the same time. InSight lander will actually land on the surface of the Mars and collect required data whereas both these CubeSats will float in the Martian orbit and collect data sent by InSight lander. These low-cost satellites will relay the data towards the Earth and get back the response so on and so forth.

Before scientists could pull off the task of ‘course correction’, they performed various communication tests on these CubeSats in order to verify its capability as there is a lot of room for errors in such kind of missions. When course correction burn was initiated, MarCO-A pointed towards the Mars successfully, however, MarCO-B has a leaked thruster that scientists have been observing for past few weeks. When they performed course correction maneuver on MarCO-B, it refined its course towards the Mars with an anomaly of few degrees which could leave room for the spacecraft to go off course.

As said, the trajectory in space is similar to that of ships in oceans where even a minute change in course can take the trajectory to a different direction. This phenomenon applies to the spacecraft in space too and thus, researchers will perform various course correction burns over the matter of few weeks and contemplate if the satellite can make it to the red planet. However, scientists at NASA’ Jet Propulsion Laboratory (JPL) which developed the CubeSats are highly optimistic and hope that both of the spacecraft reaches Mars without any trouble. JPL engineers named the two spacecraft as ‘WALL-E’ and ‘EVA’ from eh Pixar film ‘WALL-E’.

It will be tragic if these two satellites separate over their voyage to the red planet. In such circumstances, the Mars InSight lander will not attempt to relay data to these satellites and rather stick to the Mars Reconnaissance Orbiter (MRO) to relay the data towards the Earth.