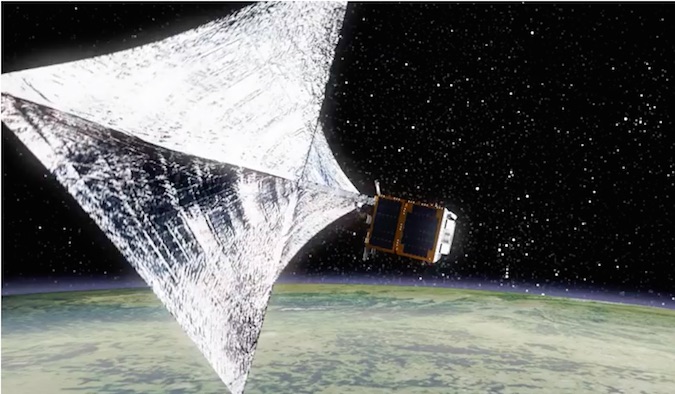 Space Junk or space debris is a real threat to the satellites and spacecraft operating in the earth’s orbit. Many scientists and researchers are concerned about the repeatedly increasing space debris around the Earth’s orbit. So, in order to initiate the process of cleaning space junk, European engineers have sent a demo space debris cleaning mission to the International Space Station (ISS).

The name of the space junk removing spacecraft is RemoveDebris. The RemoveDebris satellite was part of the cargo carried by SpaceX’s Dragon capsule aboard its Falcon 9 rocket. On Monday, The Falcon 9 rocket lifted off from the Cape Canaveral Air Force Station, Florida carrying the RemoveDebris satellite. The satellite will arrive at the ISS on Wednesday and will remain there for a number weeks, before being released by the space station’s robotic arm to start a series of operations at the end of May.

The RemoveDebris satellite weighs around 100 kilograms (220 pounds) and consists of two small cube satellites or “CubeSats”. One CubeSat will monitor and classify the space debris in orbit with the help of laser ranging (Lidar) and camera technology and the other CubeSat will snare objects with a net. The satellite also contains a laser ranging instrument and also a dragsail. Guglielmo Aglietti, RemoveDebris project’s principal investigator said, “The net, as a way to capture debris, is a very flexible option because even if the debris is spinning, or has got an irregular shape, to capture it with a net is relatively low-risk compared to going with a robotic arm.”

The tiny RemoveDebris spacecraft is built by SSTL in the United Kingdom. The research team’s main aim was to develop a space debris-cleaning technique or spacecraft that costs less and is effective at the same time. Hence, they built this demo RemoveDebris satellite which cost them around 13 million Euros. Half of those expenses have come from the European Commission and the rest half has been supported by 10 partners including Airbus and the Surrey Satellite technology limited. The Remove Debris project is led by the University Surrey’s Space Centre in Britain. The researchers think that removing the space debris with net and harpoon is a better and low-cost idea than using the robotic arm. Having said that, they also feel the net and the harpoon can be more risky in certain circumstances as compared to a robotic arm.