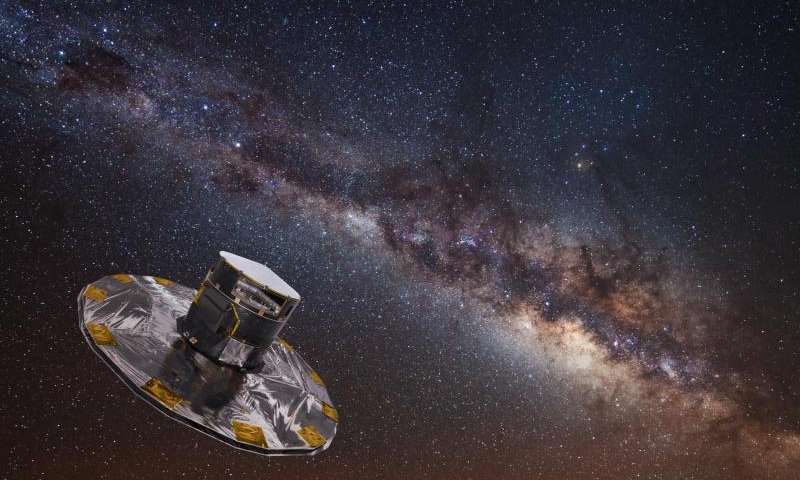 A $1billion dollar probe launched by European Space Agency back in 2013 has recently transmitted stunning images of quasars, stars, asteroids and much more. It has literally mapped a section of our Milky Way galaxy using its sophisticated equipment and instruments. Gaia spacecraft was launched to map the galaxy and stars like never before back in 2013. Following its last release of the dataset in 2015, it underwent a study spanning over 22 months capturing the proper motion, position, brightness, colors, and other aspects of 1.3 billion stars of the total 100 billion stars that make up our Milky Way.

Following a 3-day gathering of scientists, astrophysicists, and other experts at the Flatiron Institute’s Center for Computational Astrophysics where the ginormous amount of data was sent by ESA’s Gaia spacecraft giving an unprecedented view of the galaxy. Gaia’s last dataset was released in 2015 capturing 2 million stars. Its next dataset will be released in early 2020 and then finally somewhere in the 2020s marking its end.

The spacecraft collects data of the stars and other celestial bodies by calculating the parallax or the apparent shift in position when seen from opposing side of Earth’s orbit around the sun and proper motion which is the motion of the stars moving across the sky. According to the research, Gaia is not only responsible for revealing the spiralling arms of our galaxy but also, uncovering the hidden secrets and era of the galaxy which is known as galactic archaeology.

Talking about the latest dataset release, it covers measurements for more than billion stars as well as measurements for 7 million stars in the line-of-sight located within the distance of few thousand light-years of Earth. The data reveals the 3D motion of the stars through the galaxy along with calculating and registering the fluctuation in the brightness levels of more than 500,000 stars and much more. Gaia was able to detect more than 14,000 asteroids with a greater accuracy than any other previously used surveys which will help the scientists discover the formation of these asteroids as well as future locations can be predicted with it.

The dataset revealed more than half a million quasars which are cosmic beacons powered by supermassive black holes located at the hearts of distant galaxies feeding on dust and gas. This provides a reference frame for the scientists to prepare a cosmic landscape of the universe by the situation the solar system and the Milky Way at a point.

Following the dataset released on April 25, the scientists have been piercing deep into the data to look for signs of aliens or megastructures built by aliens. According to the lead author of a research paper for which, a pre-printed copy is posted on ArXiv.org, Erik Zackrisson of Uppsala University has stated that the team had earlier studied the Dyson spheres in other galaxies, however, with the dataset obtained by Gaia, it will be a new type of search for such structures in our own galaxy. For those who are unaware of what is a Dyson sphere, it is a megastructure built on a star that consumes its power output.

The researchers at the Uppsala University with varying expertise are studying unusual dimming in the brightness of the stars such as in the case of Tabby’s Star which become popular due to the speculated formation of megastructure that dimmed it to an extremely low gradient. Gaia collected the data of the stars by triangulating its position between the Earth and the stars thereby enabling the researchers to catch even the smallest deviation in its apparent position which could be caused due to the presence of another object.

The researchers even spotted two of the candidates which were published in the paper called as TYC 7169-153-1 and TYC 6111-1162-1, however, they have discarded the probability of these stars being a Dyson sphere since their signature matched up with that of a hypothesized Dyson sphere. In case of TYC 6111-1162-1, researchers found out that it was a binary star system where one of the white dwarf stars collapse into the size of a planet orbiting another star larger than the sun. This apparent change in position caused the variability in the results, however, scientists are happy with the results since the study was able findings the feasibility of alien structure and not actually finding it.

Erickson further stated that they will be studying the new dataset in order to segregate more potential candidates, however, he expressed the concern that finding the candidates isn’t difficult but following it up is little difficult. With a vast data available at disposal, there is much more work to do to find exoplanets, potential candidates with alien structures and much more.

Swarm Robotics Market Segmentation And Analysis By Recent Trends, Development And Growth By Regions To, Analysis, Forecast To 2026