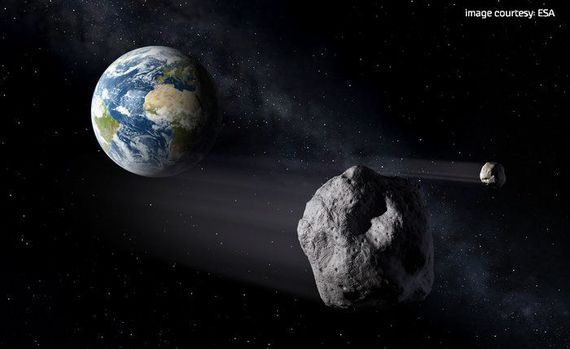 The football field-sized asteroid 2018 GE3 is larger than the size of an asteroid which fell over Chelyabinsk, Russia in 2013 when it killed 1,100 people when the 49 feet wide and 10 tons weighing asteroid fall at the speed of 33,000 mph. When it hit the ground, its pieces spread across 18 to 32 miles making it one of the severe asteroid hitting the planet. Paul Chodas, manager at the Center for Near-Earth Object Studies (NEOS) at the Jet Propulsion Laboratory (JPL) asserted that asteroids with the size of 2018 GE3 usually don’t make a close approach to the planet with just one or two instances that happen in a year.

Almost all the asteroids are located in the asteroid belt that lies between Mars and Jupiter which doesn’t pose any threat to the Earth, however, there are some asteroids which make a flyby near the Earth. Although there are sophisticated telescopes mounted around the globe to detect any instance of an asteroid, some of it might go undetected. In fact, there are many asteroid activities that take place regularly without us knowing about it.

As aforementioned, researchers weren’t able to detect the presence of 2018 GE3 until just a few hours before its closest approach but why can’t researchers detect the incoming stones? The answer is simple. Asteroids are black, dark and thus, it makes it difficult to track these stones. Although bigger asteroids are not so difficult to detect, there are dozens of small asteroids with the size of few meters, it makes it difficult to detect, however, even the smallest sized asteroid can cause regional damage on the Earth.

Asteroids are dark and dimly lit in visual wavelengths which makes it even harder to detect the presence of such stones. Take the carbonaceous type of asteroids which is very dark, dimly lit and doesn’t reflect enough light so that the optical telescope can search for its existence. Also, since these asteroids are transiting close to the Earth at high speed, it becomes difficult for a telescope to keep a track of it unless it can move at an incredible speed. This is why a technique called interferometry is used where telescopes from around the world or participating telescopes are connecting together to produce a single high-quality image of the object.

But why can’t NASA use it to detect smaller asteroids? It is because NASA’s main concern is near-Earth Objects where it tracks the orbit with the asteroids bearing the size larger than 460 feet and which is flying at a distance less than 4.65 million miles can prove fatal it in hits the Earth releasing a massive burst of energy. Since NASA is concentrating on detecting the NEOs, some small asteroids are left undetected. Although 2018 GE3 passed near the Earth, it would have caused regional distraction on the place of its landing where the impact depends on velocity, entry angle and other factors.