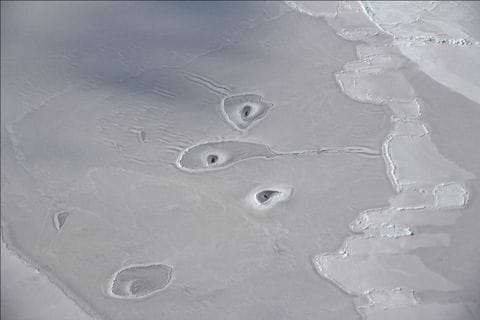 Scientists have come across a rather bizarre occurring phenomenon somewhere in the Arctic Sea where the temperature is too cold. It is one of the few regions on the Earth with the temperature well below the freezing point even during the summer days. However, NASA, the U.S. Space Agency has photographed a picture of the random pattern of holes right in the Arctic Sea which has sparked a row of comments since their origin is still under question. Since a decade, NASA has been collecting data about the Antarctic and Arctic regions with frequent flights over the region to ascertain the connection between global warming and world’s climate systems and its extent.

As a part of NASA’s project, this mission was named straight after a James Bond novel i.e. Operation IceBridge. The mission ran for over a period of six months when researchers used sophisticated instruments wiz plane based LIDAR, laser altimeters and NASA’s satellite that was assembled in order to collect data from the two hemispheres and that is where this peculiar circular-typed feature appeared somewhere in the Arctic Sea which has bedabbled the scientists as its origin and how it came about is still in question.

John Sonntag who is associated with the Operation IceBridge snapped the photo of the bizarre circular holes amidst the vast expanse of a white thin layer of ice and a freezing temperature. He stated that he hasn’t seen sort of such phenomenon ever. He saw three amoeba-shapes holes whose news soon started to go viral. This is when NASA intervened and uploaded the pictures on its April 2018 Puzzler with the caption “Your challenge is to use the comments section to tell us what we are looking at and why this place is interesting”.

And soon, the comments section began to pop up with answers with varying answers on what it could be and how it could have come about. But likely, there were no or very fewer comments that associated it with aliens or even entrance to the fortress of solitude as quoted by a news portal. People began to comment suggesting that these holes could be because of dried up salt lakes or remnants of meteorites. Some even theorized that it could be a non-crop version of a crop circle which is seen across the globe.

The photo was snapped on April 14 when Sonntag was flying on a P-3 research plane over the region in question during a flight under Operation IceBridge near the Beaufort Sea, the region that was not scrutinized in detail since 2013. He was accompanied by sea ice geophysicist Don Perovich who stated that the ice was thin, mushy, soft, and pliable. Chris Shuman who is a glaciologist for NASA’s asserted that the holes could have come about naturally due to warmer bodies of water present in the area.

Moving further, there is also a probability that seals living in the vicinity could have taken advantage of the region to bore holes in order to take breathe when they are swimming beneath the surface. Another scientist associated with the National Snow and Ice Data Center Walt Meier said that the features could have formed due to waves of water washing out when the seals surface. Sonntag, who actually took the photo of the bizarre phenomenon has been associated with several other discoveries as well. His last photo under the Operation IceBridge gave the world a glacier equivalent to the size of Delaware after he snapped the photo of the cracks developing between the ice shelves.