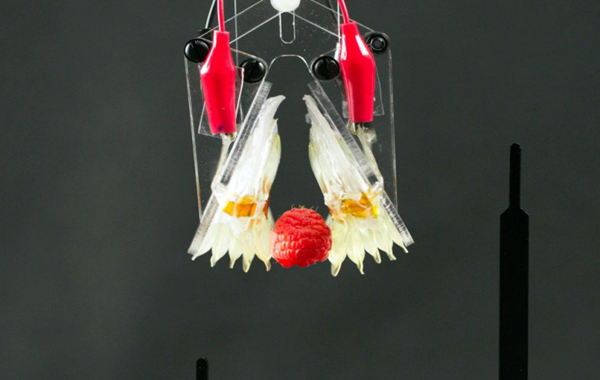 There is no doubt that robots are more powerful than human and they can also perform certain tasks very easily and efficiently than humans. But there is something due to which robot lack at some works. It is the human-like muscles, which they don’t have. Thanks to the soft robotics which has now eliminated the problem. The new muscle technology can now give soft movement functionality in robots.

The scientists of the University of Colorado Boulder have developed the next generation of the robot with a new kind of soft muscles. It works very similarly with human muscles, and it also has the self-healing capability. It can lift more weight than previously developed robotics muscles. The new robotic muscle can do many delicate tasks like grasping delicate objects like raspberries and raw eggs.  This new kind of muscle is named as Hydraulically Amplified Self-Healing Electrostatic Actuators (HASEL). It is the perfect example of the robots with biological muscle.

This new invention and the entire study was published in the journal Science and Science Robotics.  In the study, it has mentioned that In future this kind of muscles will bring a revolution on movements of robots. Normally, there are pneumatic actuators and elastomer actuators that have been using in robotic muscles technology.  Where one muscle sends gases or liquids into soft pouches to do a particular movement, the second kind of actuator passes electrical energy to stop the movement. The scientists also have detected some limitation in pneumatic and elastomer actuator.

Christoph Keplinger, a physicist at the University of Colorado and his team, has developed the new robotics muscle by combining some best factor of both actuators. Christoph Keplinger, the senior author of the research, said that HASEL actuators synergize the strengths of soft fluidic and soft electrostatic actuators to perform such kind of work that no artificial muscle has done before.

However, the team is now examining the new muscles more to enhance the working capacity. Informing about its availability, Keplinger said that it would happen very soon.