Home » News » Science » Authorities on their toes after bizarre auction of $95,000 Dinosaur Tail in Mexico 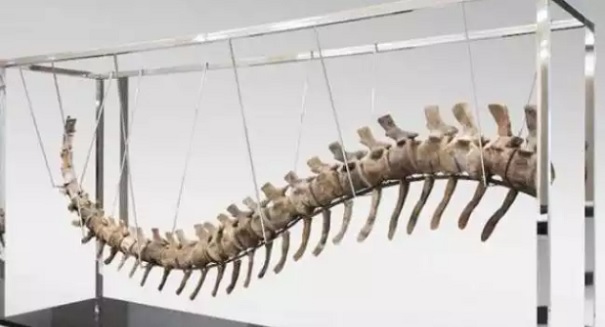 The fossil put up for auction in Mexico was sold to an anonymous buyer at approximately $95,000, or 1.8 million Mexican pesos. The authorities have opened an urgent investigation whether the Dinosaur tail was illegally transported out of Morroco or not.

The ancient fossil was accompanied by other pieces including paintings and antiques such as a medal from Mexican emperor Maximiliano. A small fraction of the earnings from this deal will be donated to Fundacion Bancomer reportedly, for the noble task of reconstruction of schools in areas affected by the earthquake on September 19, shaking most of the central and southern parts of the country.

The 13-foot long fossil, almost 160 million years old, belonged to an Atlasaurus, a sauropod dinosaur and weighs close to 180 kgs. A hot spot for dino discoveries, the Atlas mountains of Morocco were apparently the home for the beast whose tail is in the gossips. The dinosaur was estimated to be 17 meters long and weighed a massive 22 tons.

The trafficking of such dinosaur fossil is not a foreign concept in Morroco, as last April, a skeleton, which belonged to a sea dinosaur who lived 66 million years ago was spotted on auction in Paris. The auction was forfeited, and the fossil sent back to Morroco. A country with its land mass partly submerged by the sea since around 500 million years ago, Morocco is one of the richest in paleontological treasures, minerals and space rocks.

Abdellah Alaoui, the head of Morocco’s cultural and heritage department, said that the capital would seek to enforce international conventions against trafficking of items of cultural heritage, in order to prevent the treasures of the country that hold historical and scientific significance from being lost to the traffickers.

According to an appraiser for Morton’s antique department, Fernanda Becerril, the name of the dinosaur refers to the Greek mythological giant – Atlas, condemned to hold the sky on his shoulders. On the other hand, Atlasaurus may also be derived from the Atlas mountain range, where the beast was initially discovered, in the Azilal region of Morocco.

Becerril further added that the fossil had 70% of its original bones remaining and also commented about the time and efforts of the Moroccan paleontologists, who spent between 200 and 300 hours of work for the cleaning process. It was later sent to a particular facility in Utah in the United States, for final assembling.

Morton auction house from Petra Gallery, experts in fossils and minerals, were the ones to acquire the Atlasaurus’ tail, as told by their Press and Public Relations representative Kristina Velfu. “This is the first time Morton agrees to sell a paleontological piece, and we do it to help the earthquake victims,” Becerril explained La Razon, further adding, “this is a rare piece that will begin with a special price of a million pesos.”