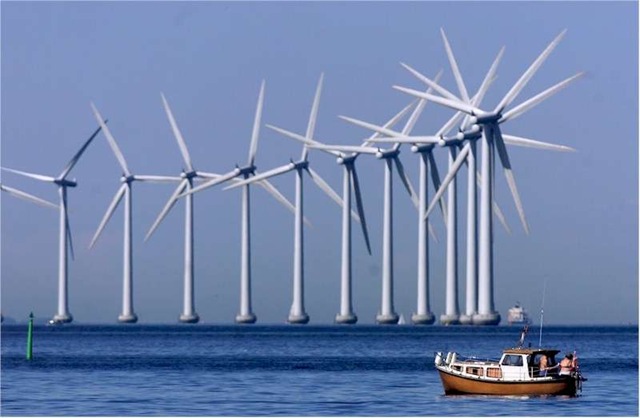 The latest research published on Monday uncovers the vast potential of wind energy over oceans that could theoretically be used to power the entire human civilization that is only if we are willing to cover a full stretch of sea with turbines and can produce ideas to install them without getting affecting by the harsh ocean environments. It is highly unlikely that we can ever build out open ocean turbines on such a significant scale and do so might even alter the climatic conditions of the planet as suggested by researchers. The core message behind this idea is that the wind energy over the open oceans has somewhat more substantial potential as compared to the land-based winds. This reinforces the idea that a floating wind farm over the deepest waters could comprise the significant next step for wind energy technology.
According to Ken Caldeira, Carnegie Institution for Science in Stanford, Calif, this idea is like a green light for the energy industry from a geophysical point of view. Caldeira worked in collaboration with the study lead, Anna Possner of Carnegie. The study of this research has been published in the proceedings of the National Academy of Sciences.
There is an upper limit to the wind farms located on land as there are both natural and human structures that create friction on the ground and slow down the wind speed. Further, each individual wind turbine extracts some of the energy of the wind and transformers it to power, leaving less amount of wind for other turbines to collect energy from. As explained by Caldeira, if each turbine removes half the energy flowing through it, by the time the wind reaches the second row, you just have a quarter of energy left with diminishes further.
The wind on the oceans is different and can be as much as 70 percent higher than those on the land. The upper limit for the amount of energy to be captured is much higher than from the winds on the land. The new research concludes that over the mid-latitude oceans, storms regularly transfer powerful wind energy down to the surface from higher altitudes. In the land, the turbines are just scraping out the lowest part of the atmosphere, but in the oceans, the mills can derive kinetic energy out of most of the troposphere or the lower part of the atmosphere.
The study here compares a theoretical wind farm of nearly 2 million square kilometers located either in the U.S. or the open Atlantic. The research finds that even after covering a very big part of the central U.S. with wind farms, it would still be insufficient to power just the U.S. and China which consumes around seven terawatts of power annually.
But the turbines in the North Atlantic could be potential enough to power these two countries and even more as the power generated here is three times higher than the one in the land.
An industry dedicated to the generation of wind energy from oceans might one day achieve this target and can provide an economic solution to the harsh climatic conditions of the ocean.

Once upon a time our moon had an atmosphere made of Volcano smoke: Study suggests
Once thought extinct, this stick bug is alive and kicking