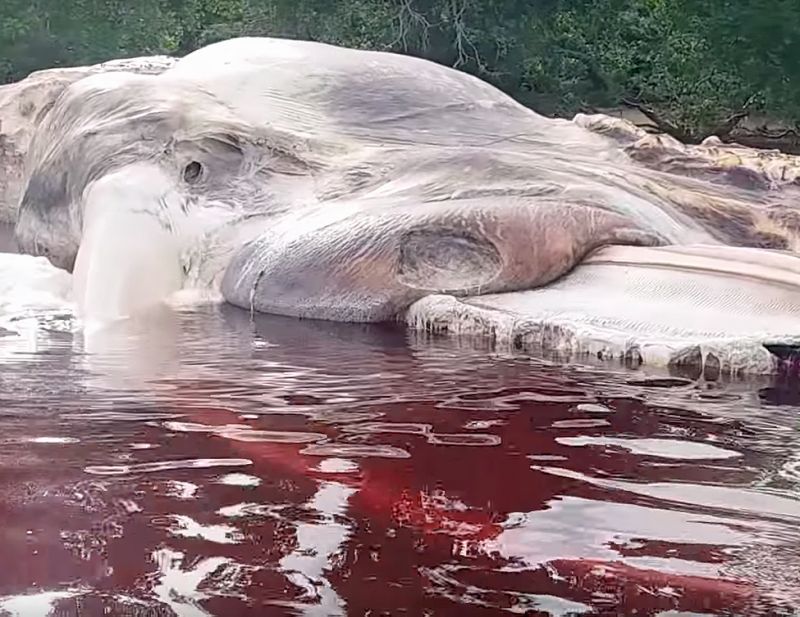 Recently, a massive shaped dead body of nobody knows what washed the shores of Indonesia’s Island of Seram. This water body has always been a mysterious one. The unusual disappearance of Barunda triangle, the unknowing growth of Baltic sea and now this, the sudden appearance of a dead body. Some are assuming this to be a huge body of any unknown living organism.

The gigantic dead body found on the shores of Island of Seram is already found decaying. It is 50 feet long massive body and nobody exactly know what it is. A resident of the place found this dead body lying by the shore at the mid of the night which he thought to be a decaying boat. Later, with the first ray of sunlight, it became very evident that it is no boat but some unknown dead body. Immediately the Jakarta Globe was reported about the incident.

Initially, the body of the dead organism was assumed to be a squid and the local government officials were called in to deal with it. However, with some further research, it was found that the dead body doesn’t belong to any squid but looks more a massively grown whale which died on the shore and is decaying now. Both squid and whale have massive large bodies and measures equally the same. Hence confusion still exists in the research study.

The photos found so far very clearly describes that it is the decaying body of a massively grown whale and not a squid. However, no fair statement has been made regarding the same. The 50 feet long body has some silver skin and lies upside down which makes the research more difficult. Moving the body may disturb and distort the shape of the dead organism, hence researchers are also not able to move it. The large bones which are seen visible now due to decaying inclines more towards the whale theory than being a squid.