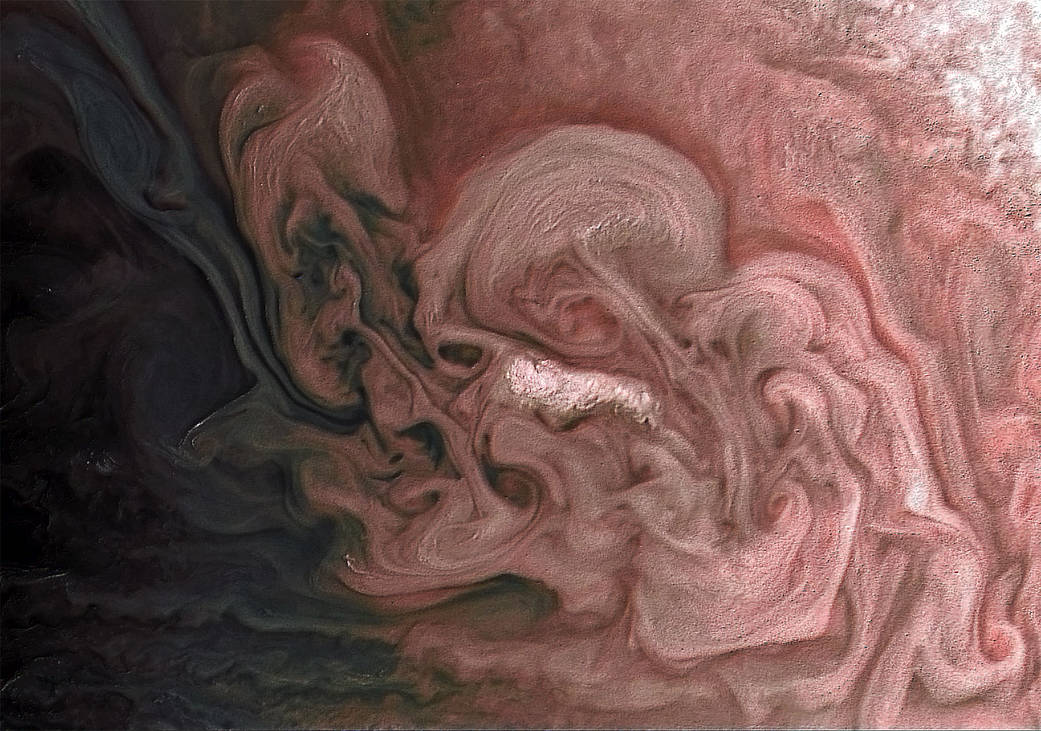 The US space agency NASA’s Juno spacecraft that is orbiting Jupiter has beamed back another stunning image of the gas giant giving a mesmerizing view of the planet. The rose-colored storms on the Jupiter as seen in the stunning photo are a delight to watch.

This image captures a close-up view of a storm with bright cloud tops in the northern hemisphere of Jupiter. NASA’s Juno spacecraft took this color-enhanced image on Feb. 7 at 5:38 a.m. PST (8:38 a.m. EST) during its 11th close flyby of the gas giant planet. At the time, the spacecraft was 7,578 miles (12,195 kilometers) from the tops of Jupiter’s clouds at 49.2 degrees north latitude.

Juno is a NASA space probe orbiting the planet Jupiter. It was built by Lockheed Martin and is operated by NASA‘s Jet Propulsion Laboratory. The spacecraft was launched from Cape Canaveral Air Force Station on August 5, 2011 (UTC), as part of the New Frontiers program, and entered a polar orbit of Jupiter on July 5, 2016 (UTC), to begin a scientific investigation of the planet. After completing its mission, Juno will be intentionally deorbited into Jupiter’s atmosphere.

Juno‘s mission is to measure Jupiter’s composition, gravity field, magnetic field, and polar magnetosphere. It will also search for clues about how the planet formed, including whether it has a rocky core, the amount of water present within the deep atmosphere, mass distribution, and its deep winds, which can reach speeds up to 618 kilometers per hour (384 mph).

Juno is the second spacecraft to orbit Jupiter, after the nuclear powered Galileo orbiter, which orbited from 1995 to 2003. Unlike all earlier spacecraft sent to the outer planets, Juno is powered by solar arrays, commonly used by satellites orbiting Earth and working in the inner Solar System, whereas radioisotope thermoelectric generators are commonly used for missions to the outer Solar System and beyond. For Juno, however, the three largest solar array wings ever deployed on a planetary probe play an integral role in stabilizing the spacecraft as well as generating power.

Juno‘s name comes from Greek and Roman mythology. The god Jupiter drew a veil of clouds around himself to hide his mischief, and his wife, the goddess Juno, was able to peer through the clouds and reveal Jupiter’s true

Juno was selected in 2005 as the next New Frontiers mission after New Horizons. The desire for a Jupiter probe was strong in the years prior to this, but there had not been any approved missions. The Discovery Program had passed over the somewhat similar but more limited Interior Structure and Internal Dynamical Evolution of Jupiter (INSIDE Jupiter) proposal, and the turn-of-the-century era Europa Orbiter was cancelled in 2002. The flagship-level Europa Jupiter System Mission was in the works in the early 2000s, but funding issues resulted in it evolving into ESA’s Jupiter Icy Moons Explorer.

Juno completed a five-year cruise to Jupiter, arriving on July 5, 2016. The spacecraft traveled a total distance of roughly 2.8 billion kilometers (18.7 astronomical units; 1.74 billion miles) to reach Jupiter. The spacecraft was designed to orbit Jupiter 37 times over the course of its mission. This was originally planned to take 20 months Juno‘s trajectory used a gravity assist speed boost from Earth, accomplished by an Earth flyby in October 2013, two years after its launch on August 5, 2011. The spacecraft performed an orbit insertion burn to slow it enough to allow capture. It was expected to make three 53-day orbits before performing another burn on December 11 that would bring it into a 14-day polar orbit called the Science Orbit. Due to an issue in the spacecraft’s main engine, the December 11 burn was cancelled and Juno will remain in its 53-day orbit for its remaining orbits of Jupiter.

During the science mission, infrared and microwave instruments will measure the thermal radiation emanating from deep within Jupiter’s atmosphere. These observations will complement previous studies of its composition by assessing the abundance and distribution of water, and therefore oxygen. This data will provide insight into Jupiter’s origins. Juno will also investigate the convection that drives natural circulation patterns in Jupiter’s atmosphere. Other instruments aboard Juno will gather data about its gravitational field and polar magnetosphere. The Juno mission was planned to conclude in February 2018, after completing 37 orbits of Jupiter. The probe was then intended to be de-orbited and burn up in Jupiter’s outer atmosphere, to avoid any possibility of impact and biological contamination of one of its moons.

JunoCam’s raw images are available for the public to peruse and process into image products at: