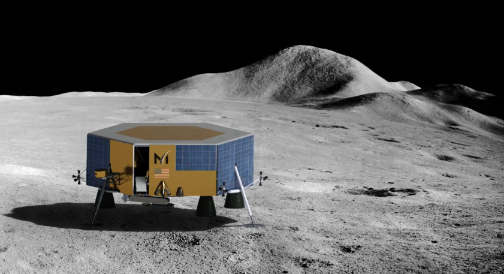 SpaceX continues to successfully dominate the global commercial launch market in Earth orbit and beyond that. Furthermore, SpaceX secured its fourth Moon lander launch contract, since Masten Space Systems selected them for launching of Masten Mission One (MM1). As part of Masten Mission One, Masten’s lunar lander will deliver nine technology and science demo experiments, as well as several commercial payloads to the lunar south pole, all sponsored by NASA.

SpaceX will send the first XL-1 Moon lander on its way to touch down on the lunar south pole in 2022. The mission was funded by NASA under the agency’s new Commercial Lunar Payload Services (CLPS) initiative in April 2020, awarding Masten ~$76 million to launch, build, design, and land its XL-1 spacecraft on the Moon.

Stephanie Bednarek, senior director of commercial sales or SpaceX said: “We are thrilled to be launching Masten’s Mission One to the Moon in 2022. SpaceX was founded upon the goal of extending humanity’s reach beyond Earth, and it’s exciting to take part in a mission with many partners who share the same vision.”

Should your company be interested in sending a payload to the Moon, you can learn more about it at www.MastenMoon.com, since a suite of NASA-sponsored scientific instruments and various payloads from commercial space customers will be carried there.

Until this date, SpaceX has successfully launched Israel’s Beresheet commercial lunar lander in February 2019. Sadly, this spacecraft failed only a few minutes before touchdown.

However, independently from NASA, SpaceX has multiple Falcon 9 launch contracts for lunar landers that should be built by Japanese startup iSpace. They are scheduled to be launched as soon as 2022 and 2023.

Masten has been developing XL-1 together with NASA for approximately five years. The result of it was rather mature design, but only a little hardware built. Furthermore, Masten has substantially changed the structural layout of XL-1, although it could be assumed that most of its critical systems remained the same.

In comparison with other lunar landers that SpaceX had scheduled to launch, Masten’s XL-1 is pretty large, with weight of 675 kg/1500 lb dry and 2675 kg/5900 lb when fully fueled. XL-1 will be able to deliver up to 100 kg/220 lb of payload to the surface of the Moon and it will be able to support this equipment with communications and power for a one whole lunar day, which is approximately 12 days.