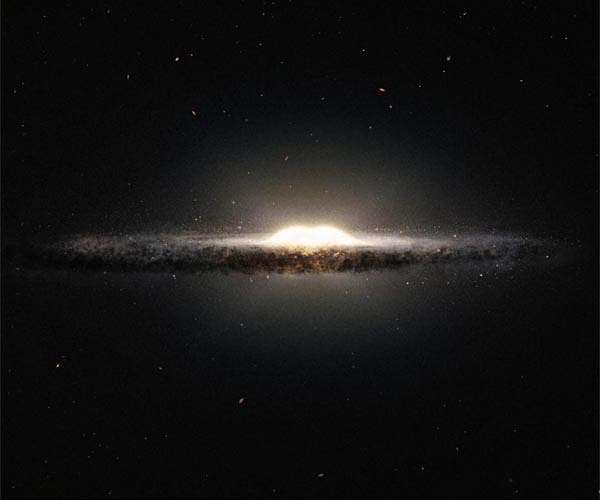 Scientists have managed to create the first large-scale age-map of our Milky Way galaxy. From the age-map, it has been revealed that a star formation lasting about 4 billion years resulted in the formation of the complex stricter at the heart of the Milky Way. On Tuesday, the results were presented at the European Week of Astronomy and Space Science (EWASS) in Liverpool. Our Milky Way is a spiral galaxy having a bulge at the center.

The bulge is thousands of light years in diameter and constitutes a quarter of the total mass of the stars. Earlier studies had hypothesized that the bulge consists of two components- one is a population of metal-rich stars and the other is a population of metal-poor stars. But there was conflict regarding this hypothesis. Recently, a European Southern Observatory (ESO)-led team decided to look at the center of the Milky Way galaxy and analyzed the color, brightness and the spectral information collected from individual stars present at center of the galaxy. Hence, they were able to reproduce the first large-scale age map of the Milky Way Galaxy. Rejbuka said that they analyzed the color and brightness of the stars to trace those that have just reached the point of exhausting their hydrogen fuel-burning in the core, which is a sensitive age indicator.

The research team used the observed and simulated data of millions of stars collected through the VISTA Variables in the Via Lactea (VVV) infrared survey of the inner Milky Way and then compared them with the measurements of the metal content or about 6000 stars present in the bulge. The measurements were taken from a spectrographic survey that was carried out with the help of a GIRAFFE/FLAMES spectrograph fitted on the ESO Very Large Telescope (GIBS).

Rejbuka said that their findings revealed that star formation lasting around 4 billion years and starting around 11 billion years ago might have resulted in that complex bulge at the center of our Galaxy. The research team also informed that the youngest star that they found in the inner galaxy was around 7 billion years old, which is older than the previous estimations. According to the researchers of the latest study, the ultimate goal of their project is to create a complete map of the star formation history of the entire bulge of the Milky Way.