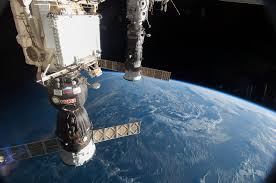 Astronaut Jack Fischer with NASA along with cosmonaut Fyodor Yurchikhin of Roscosmos lifted off on Russia’s Soyuz MS-04 shuttle, on a Soyuz-FG rocket, from the Baikonur Cosmodrome in Kazakhstan at 3:13 a.m, Thursday (April 20). Propelled on a “most optimised plan of attack,” six-circle meet, they are set to dock the Soyuz at the station’s Poisk module at 9:23 a.m. EDT.

Once the project is initiated, both of them will be a part of NASA’s Peggy Whitson in Expedition 51 crew. Astronaut Fischer and Cosmonaut Yurchikhin were initially appointed in 2015 to fly with a third group part, ESA’s Paolo Nespoli, yet a choice by Roscosmos to lessen its unforeseen from three to two cosmonauts until its multipurpose lab module (MLM) Nauka is prepared to dispatch in 2018 brought about the calendar and set changes. It is now known that Nespoli will rejoin Fischer and Yurchikhin in July when he dispatches as a major aspect of the three-part Soyuz MS-05 group to staff Expedition 52.

In a question and answer interview, astronaut Fischer replied “We are conveying some load up to the station in that third seat. I know I represent Fyodor when I say in the event that we could make sense of how to fit our wives Larisa and Elizabeth in that seat, that is who we would bring with us.”

Amid Expeditions 51 and 52, Astronaut Fischer and Cosmonaut Yurchikhin will help with several tests and administer the entry and take off of Russian and U.S. going to vehicles — the first, Orbital ATK’s S.S. John Glenn Cygnus load tanker, is set to the compartment at the space station on Saturday, April 22, 2017

For Cosmonaut Yurchikhin, this incident denotes his fifth dispatch to space, having logged an aggregate of 537 days on one space carry mission in 2002 and three long-term missions on the International Space Station in 2007, 2010 and 2013. When he arrives on Earth toward the finish of this flight, Yurchikhin will rank seventh on the planet for the time in space, only in front of Whitson.

Fischer and Yurchikhin were the first to get consent from Roscosmos to name their Russian Soyuz as “Argo.”

Cosmonaut Yurchikhin, whose call sign for the flight is “Olympus” said “It originated from the Argonauts, the marine travellers from Greek mythology and we are the pioneers of space,”

Fischer and Yurchikhin likewise each chose dolls to go about as their ship’s zero-g pointers. Yurchikhin flew a little white rich puppy for the fifth time and a couple of Russian toon characters. Fischer picked up the multi-shading sun-formed logo of the MD Anderson Cancer Center in Houston, where one of his two girls got treatment.

Russian Soyuz MS-04 is the 50th Russian Soyuz to travel to the International Space Station since 2000 and 133rd one since the principal flight of Russia’s Soyuz-class of the shuttle in 1967.