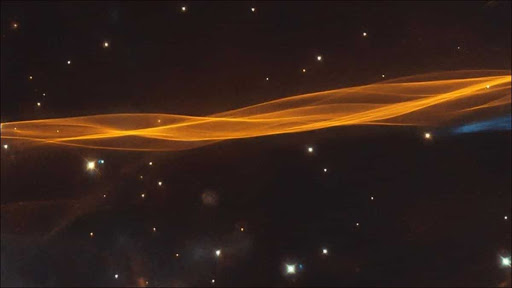 NASA shared a tranquil picture of ”a small section of a Cygnus supernova blast wave”, which immediately set sky enthusiasts on a frenzy. The picture is mesmerizing and enchanting, reminding us once again about the never-ending wonders of the Universe.

One may think that universe might seem as a scary place, but this beautiful picture could lead one start believing in magic. Moreover, it will definitely distract everyone who sees it, at least for a few moments, away from the CORONA pandemic raging on Earth

It was captured i a perfect moment, by the telescope Hubble Space, which is managed and operated by NASA’s Goddard Space Flight Center, the dreamy picture featured “a delicate and light veil draped across the sky”. It actually represented a small section of the Cygnus supernova blast wave that is located some 2,400 light-years away.

As far as 10,000 and 20,000 years ago, a dying star which was about 20 times more massive comparing to our Sun was blasted apart, due to the original supernova explosion and since then, “the remnant has expanded 60 light-years from its center.”

Taking to its Instagram handle, Hubble Space Telescope shared the same picture and elaborated, “Its shockwave is still expanding at a rate of around 220 miles (350 kilometers) per second. The interaction of the ejected material and the low-density interstellar material swept up by the shockwave forms the veil-like structure seen in this image.”

SpaceX Postpones the Launch of Starlink Project
See Jupiter, Saturn and the Moon Align in the Sky Tonight Without a Telescope