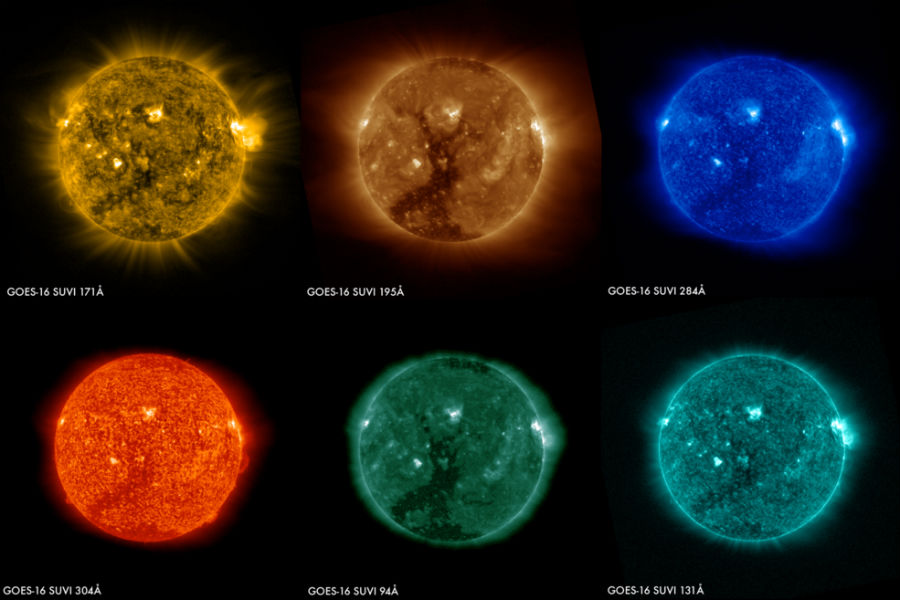 The American weather observatory GOES-16 that was launched last year on November 19 has beamed back its first ever image captured on Jan 29, 2017. The stunning image shows a massive coronal hole in the Sun which has given a deeper insight on solar activity.

The Sun has an 11-year activity cycle where it goes from voilent to mild and currently, our star is approaching solar minimum. During the mild phase, solar flares become rare with very less solar activity and coronal holes appear on the surface. Coronal holes are areas where the sun’s corona appears darker because the plasma has high-speed streams open to interplanetary space, resulting in a cooler and lower-density area as compared to its surroundings.

SUVI is a telescope that monitors the sun in the extreme ultraviolet wavelength range. SUVI will capture full-disk solar images around-the-clock and will be able to see more of the environment around the sun than earlier NOAA geostationary satellites.

The sun’s upper atmosphere, or solar corona, consists of extremely hot plasma, an ionized gas. This plasma interacts with the sun’s powerful magnetic field, generating bright loops of material that can be heated to millions of degrees. Outside hot coronal loops, there are cool, dark regions called filaments, which can erupt and become a key source of space weather when the sun is active. Other dark regions are called coronal holes, which occur where the sun’s magnetic field allows plasma to stream away from the sun at high speed. The effects linked to coronal holes are generally milder than those of coronal mass ejections, but when the outflow of solar particles is intense – can pose risks to satellites in Earth orbit.

The solar corona is so hot that it is best observed with X-ray and extreme-ultraviolet (EUV) cameras. Various elements emit light at specific EUV and X-ray wavelengths depending on their temperature, so by observing in several different wavelengths, a picture of the complete temperature structure of the corona can be made. The GOES-16 SUVI observes the sun in six EUV channels.

Data from SUVI will provide an estimation of coronal plasma temperatures and emission measurements which are important to space weather forecasting. SUVI is essential to understanding active areas on the sun, solar flares and eruptions that may lead to coronal mass ejections which may impact Earth. Depending on the magnitude of a particular eruption, a geomagnetic storm can result that is powerful enough to disturb Earth’s magnetic field. Such an event may impact power grids by tripping circuit breakers, disrupt communication and satellite data collection by causing short-wave radio interference and damage orbiting satellites and their electronics. SUVI will allow the NOAA Space Weather Prediction Center to provide early space weather warnings to electric power companies, telecommunication providers and satellite operators.

SUVI replaces the GOES Solar X-ray Imager (SXI) instrument in previous GOES satellites and represents a change in both spectral coverage and spatial resolution over SXI.

NASA successfully launched GOES-R at 6:42 p.m. EST on Nov. 19, 2016, from Cape Canaveral Air Force Station in Florida and it was renamed GOES-16 when it achieved orbit. GOES-16 is now observing the planet from an equatorial view approximately 22,300 miles above the surface of Earth.

NOAA’s satellites are the backbone of its life-saving weather forecasts. GOES-16 will build upon and extend the more than 40-year legacy of satellite observations from NOAA that the American public has come to rely upon.