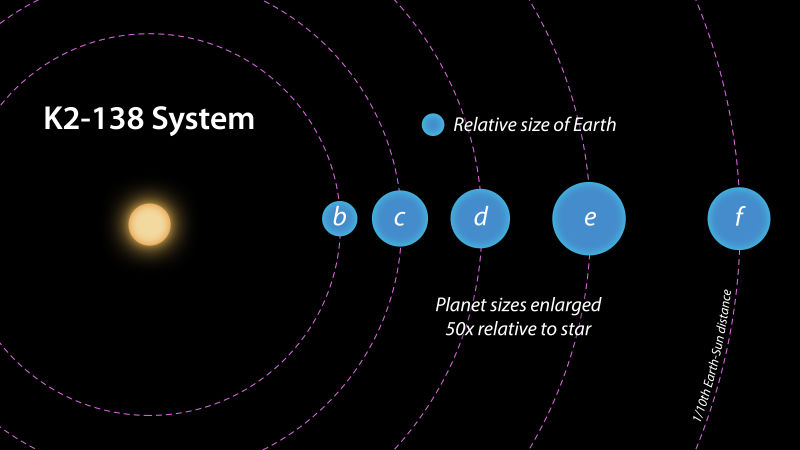 With an open platform for budding astronomers, science has seen a greater share of contribution from amateur astronomers. A recent study in the field of astronomy has led to the discovery of five planets that are rocky in nature while orbiting a star located far away.

The best part about these planets is the pattern in which they orbit. The newly discovered rocky planets orbit in a fascinating mathematical relationship termed as “Resonance Chain”. Each planet in the system takes around 50 percent longer as compared to the previous planet.

The very first prototype for the Exoplanet Explorers was initiated in the month of March 2017 at Zooniverse which is an open science-based web portal for citizens with headquarters at the Oxford University. With the help of Exoplanets Explorers, budding astronomers could analyze the data obtained via NASA’s Kepler telescope. This data had never been analyzed by the scientists at NASA. Within a short time frame of 48 hours post the launch of the project, researchers from the organization received classifications in numbers more than 2 million by 10,000 users.

The co-author of this recent study, Dr. Jessie Christiansen from the Caltech University in Pasadena stated that aspiring astronomers from all over the world can easily log on to the server and get an idea of the signals being received from exoplanets. They can also access the data acquired by Kepler telescope to confirm the possibility of a signal being transit or plain noise. Each transit detected by the telescope is being looked over by at least 10 people. The signal required at least 90 percent votes to be ‘yes’ for further characterization.

Post analysis of the entire set of data, the citizen scientists determined that there are at least 44 planets which are the size of Jupiter, 72 as big as Neptune, 44 similar to our blue planet along with 53 Super-Earth planets that are larger than our planet but small in comparison with the planet Neptune.

The best pick of these findings was the system with five exoplanets that were only slightly bigger than Earth. These planets were sealed in a certain phenomenon known as the orbital resonance. This reflects a mathematical relationship amidst the planets and the orbital periods. Each planet here takes about 50 percent longer time to orbit than its prior planet. This particular resonance chain has been termed as longest ever discovered as compared to other similar chains found previously.

Further analysis also reveals that there is a ‘sixth’ planet in this system which is also in similar resonance. However, this one skips at least two slots in the chain which indicates that there in a planet missing or could be a hint to any process unknown to scientists. This particular resonance is exactly the same as the fifth interval present in the music. This interval isn’t a perfect one. The ratio instead of being exactly around 1.5, it resonates as 1.513 followed by 1.518 then 1.528 and so on.

This resonance pattern also reflects one more similarity where normally musicians do the tuning of instruments just a slightly lower than the perfect fifth to make sure no annoying beat occurs while tuning. This change from a perfect 1.5 to slight change is similar to this tuning pattern.

The way these planets were found is also interesting. With so many data available and researchers, most of the data is left untouched. With the help of so many volunteers, all these data get new eyes to be studied. The findings of this study were published in The Astronomical Journal’s online edition.